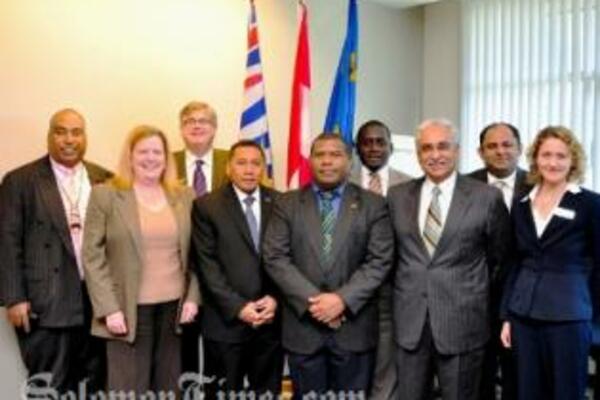 The Minister of Foreign Affairs Peter Shanel Agovaka and Minister of Education Dick Ha'amori have held consultations with Executive members of Kwantlen Polytechnic University in Vancouver, Canada on Friday.

The consultation meeting was held to look at the possibility of establishing a partnership between the University and a Solomon Islands Tertiary Institution, potentially, the Solomon Islands College of Higher Education.

Both parties were excited about the idea and are looking forward to carry out further consultations and studies on how best to establish the proposed educational partnership.

During the consultations, both parties also discussed possibilities of assessing programs of both institutions for possible cross crediting of courses, as well as areas requiring upgrading of courses and facilities in Solomon Islands.

"Hence this remains an opportunity for Solomon Islands to consider, especially considering the opportunity to send Nurses to work in Canada," Minister Shanel said.

The consultation visit was highly successful and both Ministers have expressed interest and commitment in pursuing this matter further.

Top Officials in the Solomon Islands delegation include Ambassador Collin Beck and Trevor Unusu from the Ministry of Foreign Affairs and External Trade.