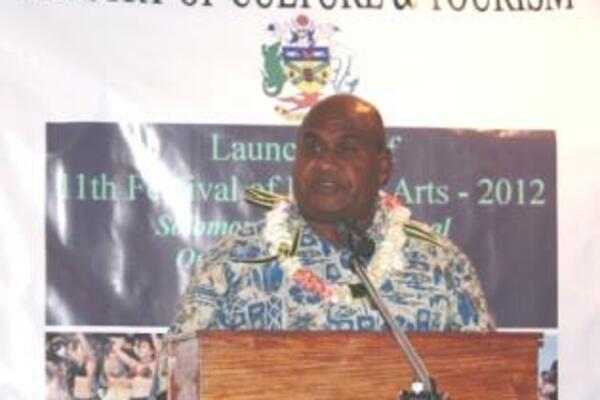 The launch marks the beginning of preparations by the Solomon Islands National Organizing Committee (SINOC) towards hosting the 11th Festival of Pacific Arts in 2012.

Solomon Islands, as a member of the Council of Pacific Arts and Culture was duly given a host status for the 11th FOPA 2012 at the 9th Festival held in Palau in 2004.

The Festival of Pacific Arts (FOPA) is the premier arts and culture event in the Pacific region. It has been held every four years since the first Festival in Fiji in 1972.

"It is the most important cultural event of the region, where all our member countries can come together to celebrate and to deliberate on the values and importance of our customs and traditions, and the role that they play in shaping the future of our region and its people," Mr Fono said.

The Solomon Islands Government, like other SPC member states, embraces the values behind the collective aims of Festival of Pacific Arts. They are:

The Government is fully committed through the Ministry of Culture and Tourism, in ensuring that Solomon Islands host a remarkable 11th Festival of Pacific Arts in 2012 and will continue to work tirelessly towards this over the next two years.

Mr Fono said this is not an easy task, as our country will be expecting some four to five thousand people, artists and visitors alike, in the country for the event.

The Deputy Prime Minister also calls on all sectors of our community to assist the National Organizing Committee in this enormous task of preparing our country to host the 11th Festival of Pacific Arts.

"The 11th Festival of Pacific Arts belongs to the Nation and People of Solomon Islands. Let us join hands and put together a collective effort in preparing towards 2012 when we shall host and witness our Pacific Family gathering together on our soil during this arts and culture festive event," he added.

The Government has every confidence in this Committee under the Chairmanship of one of our great or highly respected statesmen, Sir George Lepping in leading the preparatory work towards 2012.