Flying One of the World's Favourite Aircraft, in the Solomon Islands 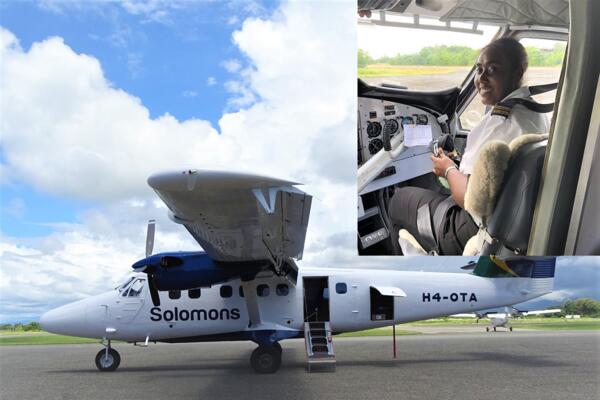 “Self doubt and looking down on yourselves will only hinder you from achieving your biggest and wildest dreams. The sky's the limit,” she said.
Source: Supplied
Share
Friday, 22 May 2020 08:20 AM

On May 20 1965, when the world’s first DHC-6 Twin Otter took to the air in Canada, it rapidly became the model for a tough go-anywhere, do-anything aircraft.

Twin Otters could be delivered directly from the factory with floats, skis, or tricycle landing gear fittings, making them adaptable bush planes for remote and challenging terrain. Countries including Canada and the United States, (specifically Alaska) had much of the demand for the first Twin Otters and many still fly there, but they can also be found in Africa, Australia, Asia, Antarctica and the Solomon Islands.

Now 55 years later, (now as Viking Air DHC-6 Twin Otter) the aircraft continues to be popular in regions where the manoeuvrability of ‘bush planes’ make them an ideal means of travel. Around the world many highly-skilled Twin Otter pilots share a passion for the versatile aircraft.

The airline is currently upgrading its Twin Otter fleet and recently completed a full refurbishment of Twin Otters H4-NNP and H4-OTA. Solomon Airlines also intends to acquire a completely relifed Twin Otter completed by Ikhana Aircraft Services. With an additional 1,500lb takeoff weight there will be significantly greater operational efficiencies.

Around the world, Twin Otter pilots are much respected for their flying skills and the same go-anywhere, do-anything attitude is embraced every day, by one of Solomon Airlines own Twin Otter pilots, First Officer Salome Agiomea.

On the 55th anniversary of the first ever Twin Otter flight, we spoke to First Officer Agiomea to find out what it is that a new generation pilot likes, about flying one of the world’s favourite aircraft?

“Flying the Twin Otter has been an interesting and fun experience for me,” said First Officer Agiomea who grew up in Malaita and the Western Province.

“I started flying the Twin Otter when I joined the airline in 2018 and I really love it. It is quite a unique aircraft being robust and capable of taking you to places that most other aircraft cannot,” she said.

“My favourite routes would have to be the ones going west, especially going all the way down to Gizo. I like this route because for me it is the most scenic.

“I did my pilot training at Advanced Aviation Training Ltd in Fiji and joined Solomon Airlines because our national flag carrier is where I could achieve both my childhood dream of becoming a pilot and my desire to serve my people of the Solomon Islands.

“There have been so many wonderful memories created over the past two years I have been with the company.

“One of my most memorable experiences was being part of the crew that ferried one of our Twin Otters (H4-MAX) back to Cairns though Gurney in PNG. It was an eye opener being able to do an international flight like that and it is one that I will never forget.

“My challenge in flying the Twin Otter is flying it out to the bush airstrips where weather and runway conditions are not always available. Hence, getting ready to accept the actual conditions is always a challenge," said First Officer Salome.

“I personally think that the Twin Otter should be and will be, here to stay. There is no other aircraft type that will be best suited for the kinds of routes and airstrips that we fly into and out of, here in the islands every day.

“The Twin Otter has served us well for 35 years at Solomon Airlines and I believe it will continue to do so in the years to come. First Officer Salome also reflected on one of her proudest moments as a Twin Otter pilot.

“One of my proudest moments and one of the highlights of my career would have to be having my Dad as a passenger on one of my flights.

"He always encouraged me to work hard and to do my best in whatever line of work I chose to pursue and to have him actually see me achieve my dreams was a true honour."

As a new generation pilot and one of three female Solomon Islander pilots at the airline, she also offered advice to other girls in the Solomon Islands who may aspire to be pilots in the future.

“I would say, continue to dream big, work hard and never look down on yourselves or doubt your capabilities as females. One of my life's motto is, "if they can do it, so can I," and it is one that I want to echo to our young girls out there.

“Self doubt and looking down on yourselves will only hinder you from achieving your biggest and wildest dreams.