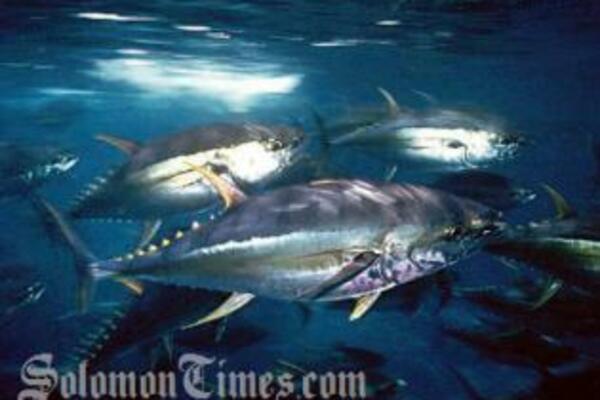 The new access fees will be charged when all fishing boats renew their license for 2011 at the end of this year.
Source: Photo Supplied
Share
Monday, 22 November 2010 09:46 AM

Solomon Islands is set to gain substantially after the government successfully negotiated an increase in fisheries access fees with its bilateral partners.

Access fees paid by foreign fishing vessels with licenses to fish in Solomon Island waters will be doubled from 2011 onwards following a major triumph by the government in its strategy to increase economic returns from fishing.

A press statement from the Fisheries Ministry says the new increased access fees comes after successful negotiations led by the Minister for Fisheries and Marine Resources, Jimmy Lusibaea with Japan, Korea and Taiwan.

The negotiations were held from the 26th of October to the 11th of November 2010.

The Solomon Islands negotiation team also included the Permanent Secretary of the Fisheries Ministry Dr Christian Ramofafia, the Attorney General Billy Titiulu and an official from the FFA Secretariat.

Fisheries Permanent Secretary Dr Ramofafia says this is the first time Solomon Islands has doubled its access fees and it was an outstanding performance by the Minister and his team.

The Permanent Secretary also revealed that Minister Lusibaea also secured from one of the fishing Associations, a 7% return of value of the catch taken from our waters.

Currently, only 6% return of the value of the catch has been agreed to by many countries in the region, including Solomon Islands.

The new access fees will be charged when all fishing boats renew their license for 2011 at the end of this year.

Solomon Islands, like other small Pacific States, have, over the years, received a very small percentage of the US$ 4 billion dollar fishing industry. The government has made it clear that it will seek ways to ensure that the country receives a fair share of profits made in our waters.