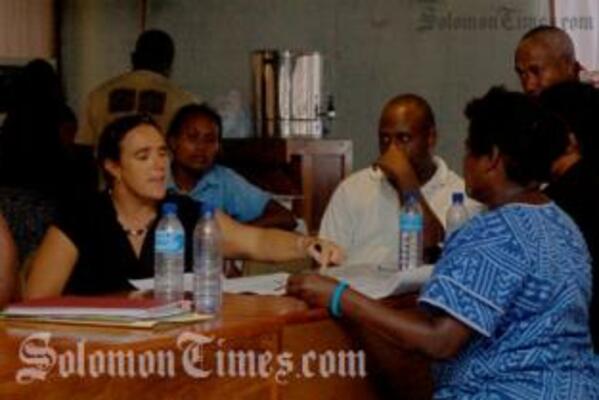 Participants during the discussions of the "Gender, Disaster Risk Management and Climate Change" workshop.
Source: UNDP
Share
Friday, 09 April 2010 10:02 AM

Imagine a woman lying unconscious and dressed in the tattered remnants of her clothing after a disaster. And imagine that it takes more time than necessary to give her first aid because the men in the search team do not want to touch her due to cultural codes.

This is one of many examples of how gender inequality can affect women during disasters. This incident is real; it happened during the flash floods on Guadalcanal in 2009. Fortunately, the women received help from a female member of the search team later on and survived.

The example shows how gender can be a critical factor during disasters, and it was revealed in a case study during a three-day workshop at Quality Inn in Honiara lasting from 30 March to 1 April.

The training workshop "Gender, Disaster Risk Management and Climate Change" gave the participants an insight into the inequalities that exists between the genders when natural disasters occur, as well as an opportunity to reflect on this issue.

The workshop was facilitated and jointly funded by UNDP, Japan International Cooperation Agency (JICA) and the Solomon Islands Government through the National Disaster Management Office (NDMO). Among the attendants were representatives from several government ministries, non-government organizations and media representatives.

In her opening speech at the first day of the workshop UN Deputy Resident Representative Christina Carlson emphasized that climate change can have an unequal impact on men and women.

"Poor women in particular are disproportionately affected by the negative impacts of climate change, as they have few opportunities for alternative livelihoods, little access to resources, and are often in charge of labor-intensive household activities such as fetching water, cooking, and caring for children. Because 80 per cent of our population lives in rural areas, this tells us that most Solomon Islanders are more at risk from the effects of climate change."

Director of the NDMO, Loti Yates, were pleased with the workshop and called for action. "It is a challenge to all the participants to make sure that some of the great ideas from this workshop can be implemented. In a modern world man and woman have equal rights, and there is a need to recognize that," Yates said.

According to a report recently launched by the UNDP, gender inequality is still widespread in the Pacific. The report, Power, Voice and Rights: A Turning Point for Gender Equality in Asia and the Pacific, underlines that countries in the Pacific fall short in critical areas such as land inheritance, laws on domestic violence and women's parliamentary representation. This workshop was the first time that the role of gender in natural disasters had been addressed in Solomon Islands.