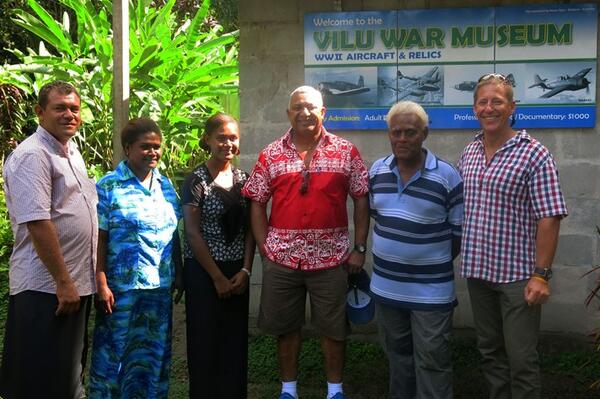 The sacrifice of Fijian soldiers during WWII will be remembered thanks to a new plaque installed at the Vilu War Museum in Solomon Islands.

Fijian Prime Minister, Commodore Frank Bainimarama unveiled the plaque during a specially organized visit to the memorial on Sunday afternoon.

The Fijian PM spent almost an hour walking around the museum with the museum owner Anderson Dua, listening with interest to the history of his collection of American aeroplanes from WWII.

His daughter, Talina Anderson spoke before the unveiling of the new plaque.
‘It is such an honour to have you here in the Solomon Islands and in our museum,’ Anderson says. ‘This is the first visit by any Prime Minister to see the important history that my Grand Father, Fred Kona worked so hard to preserve.’

The memorial for the Fijian soldiers who died during WWII was the brainchild of Silentworld Shipping Managing Director Glenn Bennett. He says that during the tensions, many of the things in the museum, including all the memorial plaques, were stolen.

‘I noticed that all the plaques for other nations had been replaced,’ he says. ‘But no one had replaced the plaque to remember the Fijian soldiers who lost their lives during the war.’

Bennett teamed up with Richard Broadbridge from Mai TV in Fiji to fund the project.

‘It took weeks and weeks of searching through the Fijian military records to find these names,’ he says. ‘Not many people know about the Fijian contribution to WWII, but 50 soldiers lost their lives and it’s important that they’re not forgotten.’
The plaque was installed by a group of Fijian soldiers on Saturday afternoon in preparation for the Fijian PM’s visit.

‘It was a really quite emotional,’ Bennett says. ‘You could tell that the Fijian soldiers really felt a connection with their fallen comrades while they were installing the plaque, a really special moment.