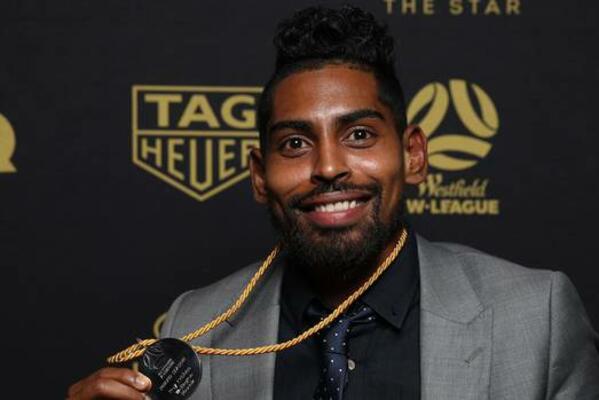 The Wellington Phoenix striker has been awarded the Johnny Warren Medal for the competition's player of the 2018/19 season.

"Growing up in a village [in Fiji], I never dreamt of getting this [award]," Krishna said.

"First of all I want to thank my boss [now ex-Wellington coach Mark Rudan] for believing in me and getting the best out of me.

"My captain [Andrew Durante] and my brothers for believing in me and making me work harder every week to achieve this.

"Also my wife and family for always being there for me, even when things don't go your way they always encourage me to love the sport.

"It shows if you work hard dreams do come true."

Krishna also took out the league's Golden Boot with 18 goals this season, breaking Jeremy Brockie's club record for most goals in a season in the process.

The 31-year-old Fijian international is off-contract and attracting interest from around the league for a big-money marquee deal.

The Johnny Warren Medal is awarded to the best player of the A-League's club competition.

It was first awarded in the National Soccer League in 1990, and upon the NSL's demise in November 2004, was carried forward into the new national club competition, the A-League.

It is named after former Australia national soccer team captain and tireless promoter of soccer in Australia, Johnny Warren.

Roy Krishna is in good company, others who have won the award include Mark Viduka, Damian Mori and Shane Smeltz, all have gone on to have successful professional careers.

Roy Krishna is the first Pacific Islander to be given such high honors in the A-League.