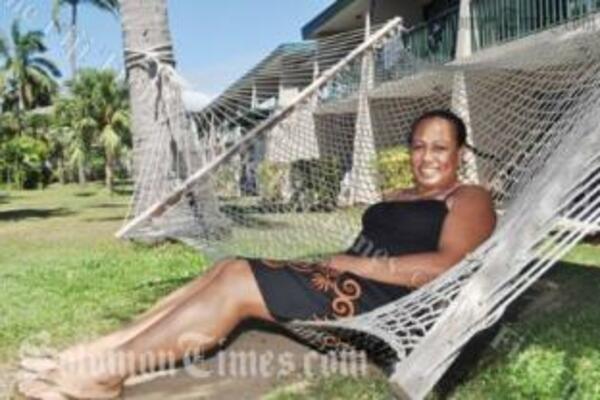 Betty Kafoa, the 43-year-old from Motusa Village in Rotuma is playing for the Solomon Islands in the 2012 Oceania Women's Rugby Sevens Championship in Fiji.
Source: fijitimes.com
Share
Monday, 06 August 2012 13:43 PM

Rotuman Betty Kafoa is set to create history when she dons the Solomon Islands jumper during the 2012 Oceania Women's Rugby Sevens Championship at Churchill Park in Lautoka this afternoon.

Betty, a 43-year-old mother-of-five, is the oldest player at the two-day event.

She hails from Motusa Village in the district of Itu'tiu, on the island of Rotuma and moved to the Solomon Islands five years ago after her husband, Freddy Kafoa Crocker, took up the position of country service manager for Daltron.

While Betty did not play serious sevens club rugby in Fiji, she took up the sport out of boredom after staying at home in Honiara.

Betty said in Fiji she was active in touch rugby representing Legends and Pointers and also took up canoeing.

She said her husband was no stranger to rugby having coached Rotuman club Ra'esea.

Betty said Freddy was the coach of the Solomon Islands men's rugby team.

"So we are both in sports," Betty said.

"Freddy used to coach and play for the Ra'esea team here. He coached the Solomon Islands men's team during the Pacific Games. He isn't here but is involved in training the men's team for the Oceania competition in Australia."

She said age was no barrier in sports and that the determination to play at her age came from her heart.

She said sportspeople should never give up hope.

"I'm a mother of five but I don't feel old at all. If you think you are old then you can't do much. Never give up if you love sports. It keeps you fit."

She said it was through touch rugby that she managed to get into the Solomon Islands 7s team.

"When I went to the Solomon Islands there was nothing to do staying home," Betty said.

"So I decided to take up sports. I started with touch rugby. Actually we revived the sport there.

"Then I decided to take up rugby 7s. I enjoy the sport. I have been playing for three years. It is good to have the other girls play and enjoy. At the same time I teach them a few skills.

"I'm happy to be back at home but I'm representing the Solomon Islands."