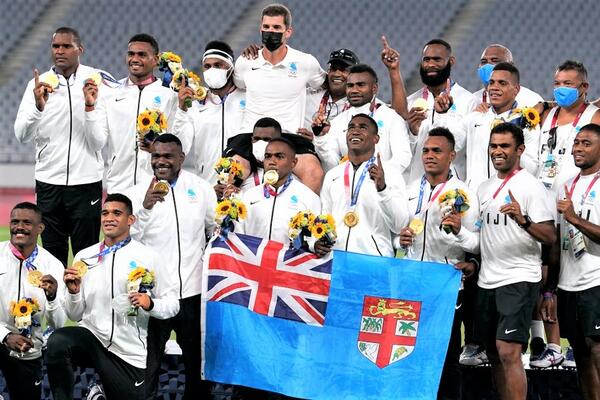 The sport made its debut in the Summer Games in 2016 at the Rio Olympics, meaning the Fiji team are now undefeated in Olympic rugby sevens competition.
Source: Planet Rugby
Share
Thursday, 29 July 2021 10:48 AM

It may have been the early hours in Fiji, but Fijians were celebrating, with videos popping up on social media of groups of locals taking to the streets to dance and sing.

They were celebrating their rugby sevens team's victory in the men's final at the 2020 Tokyo Olympics making them back-to-back Olympic gold medal champions.

For Baber and his players, it's been a strange and long journey preparing for an Olympic Games in the middle of a global pandemic.

"We locked them down for five months," he told the media after his side's victory.

"They tried to break out a few times as well. It's been a really strange year since things were postponed. We were locked down in Fiji, then we went to Australia, where we quarantined for a period of time.

"I've got to pay special tribute to the players and staff who have done this. They came into a training camp on Easter Monday thinking they were going back on the Friday, and on the Tuesday, they were told they couldn't go back and haven't seen their families since. That takes a special kind of person to make that commitment.

"We had containment zones established in Fiji at the onset of Covid-19 in April. We were effectively locked up in Suva in a Christian hostel called St. John's Hostel. We were given special exemption to continue our rugby training.

"We built a gym, basically in the garage of the hostel, and we were there for about 12 weeks. In fact, when the players go back and do their quarantine, it will have been about 20 weeks since they were last with their families. We had huge support in Fiji."

Ben Ryan, Fiji's coach when they won gold in 2016, took to Twitter to praise the side.

"Wananavu! I'm soooo pleased for every Fijian today and all the players and staff, what a victory," he said.

"And a word on Gareth Baber. I know more than most the pressure he will have been on. Hard to explain to non Fijians but it would have been huge and he has done dealt with it BRILLIANTLY. Amazing job," Ryan continued.

The sport made its debut in the Summer Games in 2016 at the Rio Olympics, meaning the Fiji team are now undefeated in Olympic rugby sevens competition.

Winning the gold medal clearly meant a great deal to many of the players, but none more so than Tuivuaka and Josua Vakurinabuli, who both paid tribute to lost family members after winning.

"My brother and my father passed away when I was small. I am so lucky to represent them," Tuivuaka said.

"My mother sacrificed a lot for me. I grew up in a rugby-playing family, which motivated me a lot to keep on working hard, so I can achieve this. Maybe the first thing when I phone home (tonight), I will give a big 'vinaka' (thank you) to them."

For Vakurinabuli, who is a prison officer back in Fiji, he has had to make many sacrifices to reach the pinnacle.

"My father passed away in the last year. So to play rugby at the Olympics is for my father and my family," he said. "People are struggling in Fiji and we played this match for them. Everyone in Fiji will be proud in their villages.

"I am a prison officer back home. I was working hard during the pandemic doing night shifts and day shifts. I have a baby boy who is one year old and I have not seen him for four months. It is tough for me but it gives me strength to think about my boy and my dad. This gold medal is for them."