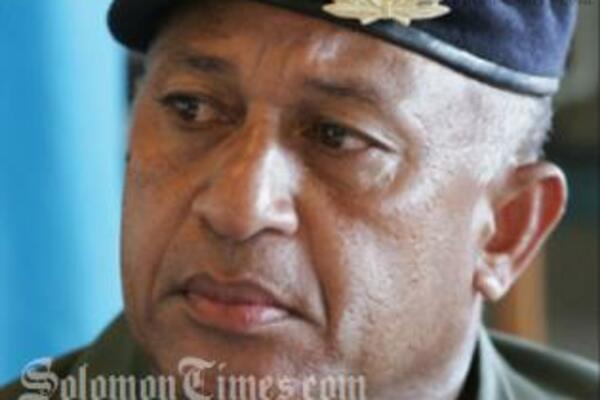 In July, when Mr Natapei was the prime minister, he cancelled the MSG summit as not to give the chairmanship to Commodore Bainimarama.
Source: Supplied
Share
Thursday, 16 December 2010 09:15 AM

Vanuatu has handed over the Chairmanship of the Melanesian Spearhead Group to Fiji.

The handing over follows a traditional reconciliation ceremony held yesterday morning in Honiara.

Speaking after the ceremony Prime Minister Danny Philip thanked the MSG countries for attending the special summit, in particular the Prime Minister of Vanuatu, Sato Kilman and the Foreign Minister of Fiji, Ratu Inoke Kubuabola, for their understanding and cooperation.

Prime Minister Philip said that the reconciliation ceremony is a testimony of the "value, strength, and relevance of the Melanesian cultures and traditions including the role of chiefs in settling differences."

He thanked the outgoing Chairman of MSG, Vanuatu for looking after the affairs of the group for the previous years while congratulating Fiji for taking the Chairmanship.

Mr Philip said he is confident that under the new leadership of Fiji and the support of the MSG secretariat they will move forward to address the needs and interests of the people.

Mr Natapei has also condemned the decision of the new Vanuatu Prime Minister, Sato Kilman, to support the plan to make Commodore Bainimarama the MSG head.

He made the comment after Mr Kilman left for Honiara to reconcile Vanuatu with Fiji and to join a Solomon Islands-sponsored process to make Fiji the MSG head.

In July, when Mr Natapei was the prime minister, he cancelled the MSG summit as not to give the chairmanship to Commodore Bainimarama.

Mr Natapei said he accepts that Fiji is an MSG member that can participate in any MSG activities but not to hold the position of the chairman.

He said if Fiji takes the MSG chairmanship, the organization will be put into question by democratic countries.