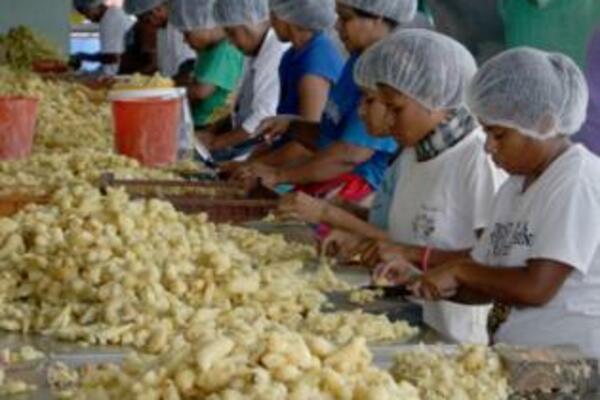 SPC assists with revival of industryKaiming Qiu believes in taking chances. The agro-entrepreneur recently opened a FJ$0.5 million processing facility in Navua, some 45 minutes outside the Fijian capital of Suva, which will produce powdered, crystallised and syruped ginger products for export markets.

It may turn out to be a shrewd investment for Qiu, who's built a solid agricultural business from the ground up. The Sichuan native first arrived in Fiji in 1996 as an architectural engineer on a Chinese construction project and when his contract came to an end, Qiu decided to stay on in Fiji and made the switch to farming.

It was a move that paid off. After years of supplying fresh produce to exporters and processors, Qiu launched Kaiming Agro Processing Ltd in 2006 dealing in frozen manioc, taro and brined ginger products for export. Today, it's one of Fiji's leading agricultural exporters with combined total exports of 1,915 tonnes in 2010 valued at F$2.1 million, up from 1,245 tonnes in 2009 valued at F$1.2 million.

Qiu's decision to expand into value-added ginger products comes at a time when the industry in Fiji is showing signs of revival after a significant lull period. During its heyday in the late 80s and early 90s, Fiji had a sizeable ginger industry before a nematode (plant parasitic roundworm) disease ravaged the industry.

However, demand for Fiji's ginger (renowned for its unique flavor and high in oleoresins but low in fibre) never dissipated, with exports of F$1.4million last year. In 2010, an Australian Centre for International Agricultural Research supported study recommended the production of disease free ginger seeds at industry level, which the Secretariat of the Pacific Community is currently undertaking through its European Union-funded Facilitating Agricultural Commodity Trade (FACT) project in collaboration with the Fiji Department of Agriculture.

The goal of the five-year aid for trade pilot project, which started in 2008, is to increase the volume, value and diversity of Pacific Islands agricultural and forestry export products, with the view that any increase in exports will impact positively on rural communities by generating employment and economy.

In addition to the technical assistance the project provides to 18 partner enterprises (such as Kaiming Agro) in seven Pacific ACP countries across their entire supply chain, the project supports the development of new exportable agricultural commodities such as ginger.

The lack of disease free planting materials is a key impediment to the success of Fiji's ginger industry and the FACT project is working with two farmers, one in Seaqaqa on Vanua Levu in the country's north and another in Rakiraki on the main island of Viti Levu to change that. Both farmers are located in the drier parts of Fiji for a reason. Nematode and pythium fungal rot diseases thrive in wet conditions, which also happen to be ideal for growing ginger. At present, Fiji's main ginger growing areas are concentrated on central Viti Levu, which gets significant annual rainfall.

The project has assisted with the set-up of the two commercial seed farms this year, which are expected to yield some 60 tonnes of planting materials in 2012 and 300 tonnes of clean disease-free ginger seeds for sale and distribution to growersby the 2013 harvest season. In addition, new ginger growers will be able to follow the standards set by the two demonstration farms in order to produce exportable ginger.

With enterprise partner Kaiming Agro, the FACT project has assisted with the research and development of the company's new ginger products, purchase of new processing equipment and the expansion of its storage capacity. The project is also advising the company and training its employees on international food safety standards such as GMP and HACCP, an increasingly critical requirement for export markets.

Since opening the new facility, which has the capacity to process 1200 tonnes of ginger per annum, Kaiming Agro expects to buy more produce from the 350 to 400 grassroots suppliers it works with and increase the number of growers in time to come. Already there is a need for an additional 650 tonnes of raw ginger, which will mean an extra F$500,000 in earnings for farmers who supply Kaiming Agro. Luckily, the disease free ginger seeds made available through the FACT project-assisted seed farms will make their lives and the lives of Fiji's other ginger farmers a little easier.

The lessons learnt from the four year pilot project will be built upon in a new ?9million aid for trade project signed by the European Union and the Secretariat of the Pacific Community in May. Operating in the 15 Pacific ACP countries, the four-year Increasing Agricultural Commodity Trade (IACT) project will work to improve Pacific ACP countries' economic integration through strengthened national systems and institutional frameworks, develop trade capacity, increase private sector competitiveness and increase international market access.