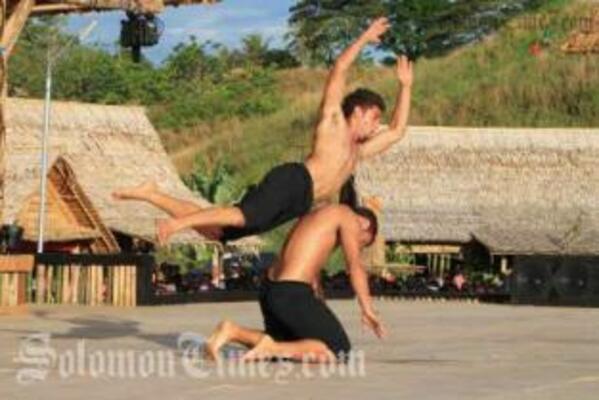 As the Solomon Islands celebrated its 34th independence yesterday, the people of the Pacific paid tribute to those who helped shape this nation with song, dance and displays that depicted the freedom of their cultures and traditions.

From the Pacific Voyagers, the traditional Solomon tomoko fleet, to the people of different beliefs, colours and walks of life from far-flung Pacific islands, it was a celebration of cultural diversity.

The 100-plus Fiji delegation - in Honiara and Gizo, one of the satellite venues for the festival - put on performances that kept the thousands who have converged here for the four-yearly party asking for more.

As night fell over Honiara yesterday, it was certain that the final week would be a climax never before seen in the history of the festival.

"So far it's been an enjoyable experience for everyone here, for the Fiji delegation and the rest of the Pacific," said Josefa Natau, the director of the Fiji Arts Council.

"We can clearly see the impact our delegation has made on the people of the Pacific, demonstrating our national heritage, cultures and our traditions.

"It's been awesome and wonderful."

Beqa's firewalkers have been Fiji's drawcard and the men of Dakuibeqa are preparing for their next show on Thursday before the festival closure on July 14.

"Hours before the first show started, hundreds of people were already crowded around our firewalking perimetres cheering for our performers even before they showed.

"That response of the public to the vilavilairevo has been outstanding and very encouraging," he said.

"Our people are looking forward to the rest of the show."

Fiji's elegant fashion wear went on display at the Lakeside Stage at the Festival Village on Friday to the cheers of the locals who thronged the waterside.

From traditional masi wear to modern sulu jaba and sulu vakataga, the Fijians paraded down the catwalk in style.

Mr Natau said while this year's event was an opportunity for the host country to showcase its cultural diversity and its people, the visitors from around the region acknowledged the various cultures and arts and shared ideas in the fields of culture and art.

"The people are great here and we're all looking forward to the rest of the festival. It is the best so far and it'll get better the next time."