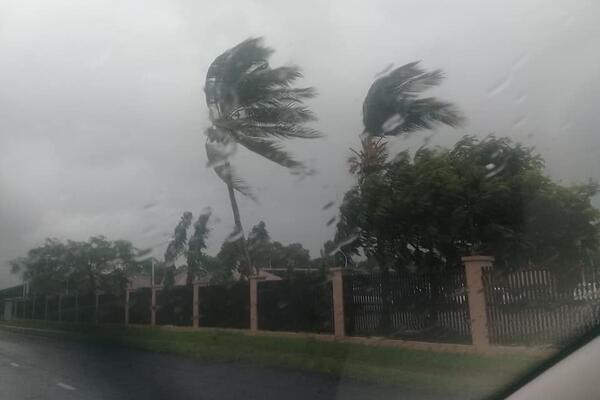 Keni is the second cyclone to hit Fiji in just over a week after Cyclone Josie left six people dead over Easter.
Source: @FijiRedCross
Share
Tuesday, 10 April 2018 07:45 AM

Fiji's Disaster Management authorities are warning people to get their disaster kits ready as another approaching cyclone gathers strength.

Cyclone Keni is a Category 3 storm and is expected to be closest to the islands from midday today.

The Fiji weather office is expecting Keni to pass south of Nadi before making landfall over the southern island of Kadavu. People are being told to expect destructive winds of up to 170 kilometres an hour.

The government said they need to prepare a three day family disaster kit, strengthen their homes, be ready for power cuts and evacuate if need be. It's the second cyclone to hit Fiji in just over a week after Cyclone Josie left six people dead over Easter. Last week's major flooding in the west and north of Fiji also left two dead at the weekend.

A tropical cyclone warning remains in force for Viti Levu, the Yasawa and Mamanuca groups, Beqa, Vatulele, Totoya, Matuku, Lomaiviti and the sotuhern Lau group, Kadavu and nearby smaller islands (Matanuku, Ono and Galoa) and is now in force for the rest of Fiji.

A hurricane warning remains in force for southwest Viti Levu, from Lautoka through to Sigatoka, Navua, the Mamanuca group, Vatulele, Beqa, Kadavu and nearby smaller islands, Moala, Totoya, Matuku and Ono-i-Lau.