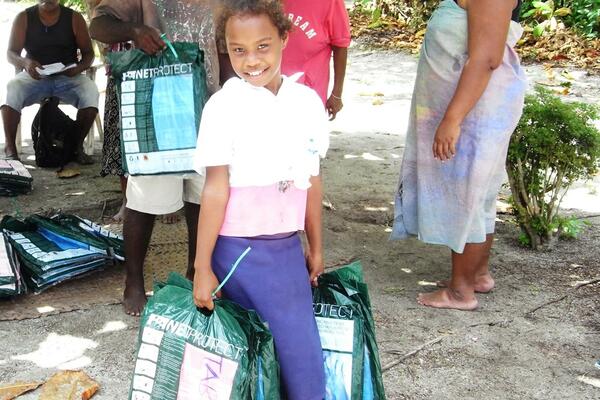 By boat, truck or foot – tyranny of distance no barrier for distribution of bed nets to stop malaria.

When you look at a map of Solomon Islands, you get a glimpse of how hard it is to deliver to services to nearly half a million people scattered across around 90 of the 990 inhabited islands that make up the country.

On the ground, the challenge is even more confronting. Some islands are big, others small. Villages are scattered in remote locations. Banana boats on rough, open seas are often the only way to move from village to village. Or people are forced to trek for hours over mountainous terrain, cutting a path through dense bush growth as they go.

These challenges are all being met head on with the country-wide distribution of 412,000 life-saving insecticide-treated mosquito bed nets to families in Solomon Islands in an effort to control and eliminate malaria.

Since then, the Ministry of Health and Medical Services, through the National Vector Borne Disease Control Program has been coordinating the distribution of nets, which are provided free of charge, to every household in Solomon Islands.

The nets, purchased by the Global Fund to Fight AIDS, Tuberculosis and Malaria to replace those distributed in 2010, are being distributed with assistance of the Australian aid program. Distribution will continue in 2014 until the goal of distributing to 95 per cent of households is reached.

Director of the National Vector Borne Disease Control Program, Mr Albino Bobogare, who is coordinating the distribution, said the bed nets arrived in Honiara in May and are being progressively distributed over a12 month period.

“We’ve had a small army of workers from the Ministry of Health who are distributing treated bed nets to every household in the country. Nets have been delivered by boat, by car, by foot – by any means possible,” Mr Bobogare said.

“Mosquito nets are a proven and effective intervention in the fight against malaria. They stop mosquitos from biting people while they sleep and also kill mosquitos and other insects when they touch the net. This helps to stop the transmission of malaria from one person to another.”

“The logistical challenge of distributing nets to all households in malaria affected areas in Solomon Islands is one of the most difficult interventions currently being implemented by the malaria program.”

Australian High Commissioner to Solomon Islands Matt Anderson said Australia’s support to the Ministry of Health to distribute the nets was a practical way to fight a preventable, but costly disease.

“The incidence of malaria in Solomon Islands has fallen from 82 cases per 1000 in 2008 when Australia started working more closely and intensively on this disease with the Ministry of Health, to less than 45 cases per 1000 in 2012. Fewer Solomon Islanders, including pregnant mothers and infants who are particularly vulnerable to malaria, are dying thanks to both Government and donor efforts.”

“These results mean that communities are healthy and stronger - children can attend school, adults return to work and the young and the elderly remain in good health, free from the burden of malaria-related illnesses,” Mr Anderson said.

Australia is providing A$14.75 million over four years to help control and progressively eliminate malaria in Solomon Islands. The funding supports the implementation of the Solomon Islands Government’s national malaria program which coordinates efforts around a single work plan and uses the combined resources of Australian development assistance, the Ministry of Health and Medical Services, the Global Fund to Fight AIDS, Tuberculosis and Malaria, JICA and the World Health Organization.