FAST Party Lawyer Dismisses Claims of Swearing in as Illegal 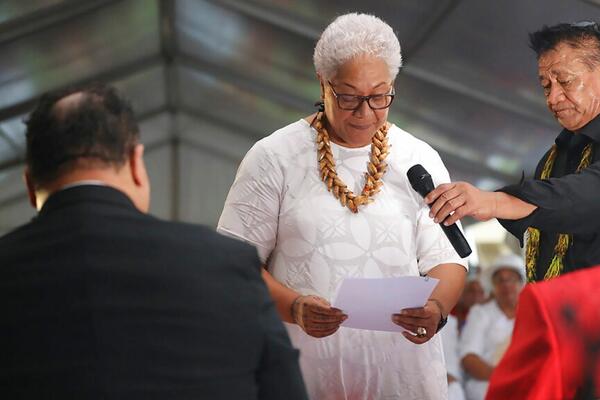 Samoa's first female prime minister was locked out of parliament by the country's outgoing leader - but still sworn into office in a makeshift ceremony held inside a tent.
Source: news.sky.com
Share
Wednesday, 26 May 2021 09:33 AM

The lawyer acting for the FAST party in Samoa has rejected claims that the swearing in of the party's Fiame Naomi Mata'afa as Prime Minister on Monday, in a tent outside of Parliament, was unlawful and unconstitutional.

When asked by Pacific Beat what she made of the claims by Tuilaepa Sailele Malielegaoi, who's been Samoa's Prime Minister for more than 20 years, she responded with “bah humbug”.

“We've spent the last five weeks in court challenging all the grubby things that [the HRPP party which has dominated Samoan politics for four decades] have been doing. Misusing the law, and all the officials,” Taulapapa said.

“And the most disgraceful behaviour [on Monday was] locking us out of our house, the people's house.”

FAST party members decided to conduct their own ceremony in a large tent outside the Parliament, with leader Fiame Naomi Mata'afa declaring herself as Samoa's first female prime minister.

A former political advisor at the U.S embassy in Apia, Sala Dr George Carter, who is now a research fellow in the Department of Pacific Affairs at the Australian National University, said the Samoan people are becoming frustrated and they want the ongoing political crisis to end.

“There are a lot of timelines,” he told Pacific Beat

“There's a budget that needs to come in on 01 June, which is also Independence Day, and we all hope...these can form deadlines for the parties to come to the fold....and see a pathway forward for Samoa,” said Dr Carter