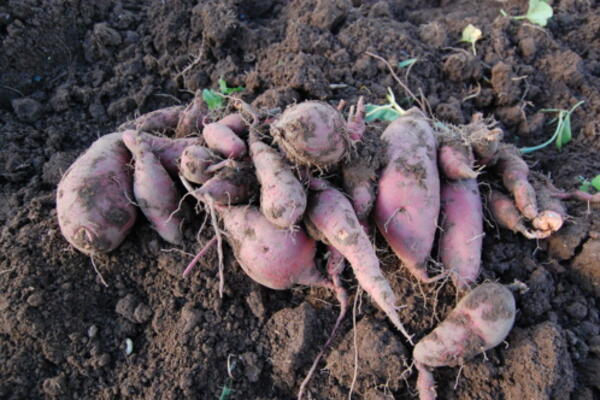 Communities that have mainly depended on sweet potato as their staple crop are having to diversify to produce more sustainable food sources.
Source: photo supplied
Share
Friday, 19 April 2013 10:38 AM

Solomon Islanders are being forced to change their food production and consumption habits due to climate change.

Poor soils in some areas of the country, brought about by the changing climate, are among the causes affecting the production of traditional crops.

Communities that have mainly depended on sweet potato as their staple crop are having to diversify to produce more sustainable food sources.

Permanent Secretary of the Solomon Islands Ministry of Agriculture and Livestock, Frank Wickham, has told Radio Australia's Pacific Beat that the government is trying to help communities adjust their farming systems.

He says sweet potato is the most affected crop.

"[We're] bringing in a wider diversity of crops so that they're not fully reliant on sweet potato," he said.

"It's a combination of a number of factors. Soils - fragile soils, population pressure on those soils and the high rainfall intensity."

He says higher rainfall means sweet potatoes are not growing to their full size.
The ministry has done various assessments around the Solomons and is looking to adapt farming systems by increasing crop variety and improving soil fertility.

He says the change to varied crop production will take time, but will hopefully bring about more opportunities to sell surplus produce.