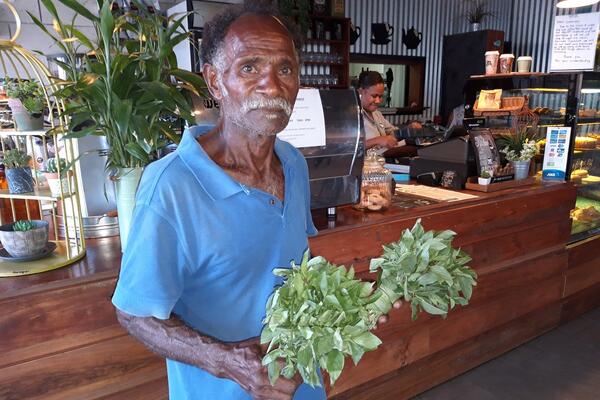 “One cannot afford to be ashamed. If you are the type who is embarrassed to be seen doing this, then you will not be able to do it”, Francis says.
Source: STO
By Georgina Kekea
Share
Friday, 11 September 2020 11:01 AM

Francis Paruvata comes from Savo Island. Today, he now settles in the highlands of Aruligo where he has a small area that he does his farming on.

Together with his wife, they are able to sustain themselves through the sale of fresh greens and vegetables. Today he was doing his rounds in the city, selling fresh produce.

“I have here with me, eggplant, chilly, tomato, peanut and a cabbage the Chinese call ‘flower cabbage’, Francis says.

Francis has three children. His youngest is 21 years old. He also has two other sons who are now married and have a family of their own. Only the youngest child, who underwent agriculture studies at Don Bosco is currently helping his parents in the garden.

“I only reached grade seven and then for a year I worked with the education ministry before going back to my home village”, Francis says.

Since going back home to the village, Francis then spent most of his time in the garden. Back then, he usually traveled from his home Island of Savo to Honiara central market.

“But I found it to be a very expensive exercise. Most of my earnings will be spent on fare alone”, Francis says.

It was only two years ago, Francis then moved from Savo to Guadalcanal. He says it is cheaper to catch a public bus to Honiara and walk the streets to sell his produce rather than spending long hours in the market.

“One cannot afford to be ashamed. If you are the type who is embarrassed to be seen doing this, then you will not be able to do it”, Francis says.

Francis usually comes to Honiara with his produce, two times in a week. His earnings often range from $300 to $500.

“It is enough for us to buy salt, sugar and whatever items we need”, he says with a smile. His produce ranges from the price of $5 to $20. He says he tries to keep his price affordable for people as much as possible.

He says being in the village, his expenses are few and he gets to save a bit of the money he earns for emergencies.

“It is a teamwork effort between my wife, son and myself. I am tasked to be the salesman because I am not shy. My wife also does some marketing back in the village. My son helps out in the garden so this is how we do our work”, Francis says.

“I do not think that to rely on a stimulus package is a good idea. Just work hard and you will get more from the work that you do.”

Francis usually starts his rounds in Point Cruz before going up to Ranadi and KG. If he still has a few produce left, he will then go down to the Kukum area before going back to Point Cruz.

Francis is now in his sixties.