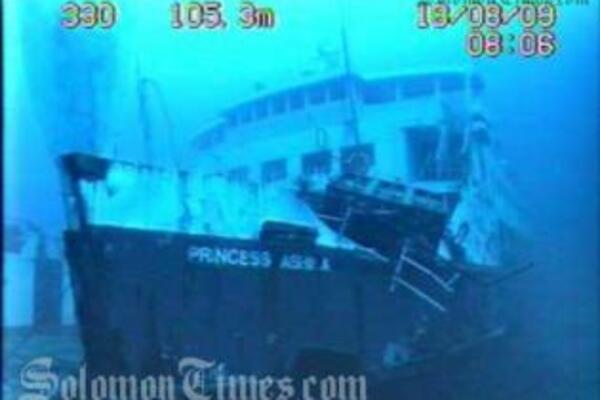 The families of the victims of the Tongan vessel, MV Princess Ashika, ended their 17-night vigil on Friday. Earlier, the country's Police Commander, Chris Kelley, announced that the aerial and surface search for survivors has ended.

As reported by Matangi Tonga Online, bereaved families spent 17 nights of camping in tents outside the Shipping Corporation of Polynesia Ltd. (SCP) office at Queen Salote Wharf, anticipating news of relatives who were onboard the MV Princess Ashika, and on Friday, 'put closure to the hope of recovery and returned home'.
Board members and staff of the SCP 'held a special prayer service and luncheon for the families to remember the lives lost at sea'.

Earlier, the island kingdom's Police Commander had announced that the search for survivors had ended.

"I do not believe there is any hope of finding anymore survivors," said Cdr Kelley, but "the police inquiry will continue, and is separate from the Royal Commission of Inquiry, but all information will be made available to commission of inquiry.

"Operation Ashika is now on stand-by and any further action is for Government to decide," he said.

"The site is marked by a buoy, and the restriction on the no-fly and no-go zone is still enforced, but I am more than happy to approve for people to visit the site if they wish, because I think that is important, and I had two requests, which I approved to go to the site," he said.

Meanwhile, according to the Matangi Tonga, the Operation has confirmed that there were 128 persons on board the Princess Ashika when it left Nuku'alofa on its August 5 voyage of which 54 were rescued, 2 bodies recovered and 72 missing persons (68 passengers and 4 crew).
Please follow the link below to the Matangi Tonga article for the list of the missing and deceased.

Matangi Tonga has also reported that on Wednesday morning, the 19th of August, a three and a half minutes clip was shown to the Tongan media of the sunken ship.

SITTING in an upright position, the sunken MV Princess Ashika can be clearly seen in a video captured by a Remote Underwater Operating Vehicle working at over 100 metres on the Ha'apai seabed, including evidence of human remains observed by a navy survey team yesterday.

According to the report, the clip was shown by Lt. Commander Andrew McMillan of the HMNZS Manawanui, who said that the team, who controlled the hour and a half ROV survey of the vessel, observed human remains.

"But my team acted in a very professional way when approaching the scene and were very respectful towards the remains and concentrated solely on the vessel."

According to the report, Commander McMillan said that the condition on the wreck site was quite hazardous with a lot of ropes, wires and bits of debris that the ROV could have been caught up in but they managed to get into the cargo hold general area.

The country's Police Commander stated in the briefing that Chris Kelly, he believed that they had reached the limit of their capability to either find any of the missing passengers alive or be able to bring up any remains from the sunken vessel.

"I consider we have exhausted all likelihood of finding survivors and in that respect I believe the families of the 72 persons accounted for can complete closure for their loved ones," he said.