Failure in Copenhagen is Not an Option: Ambassador Beck 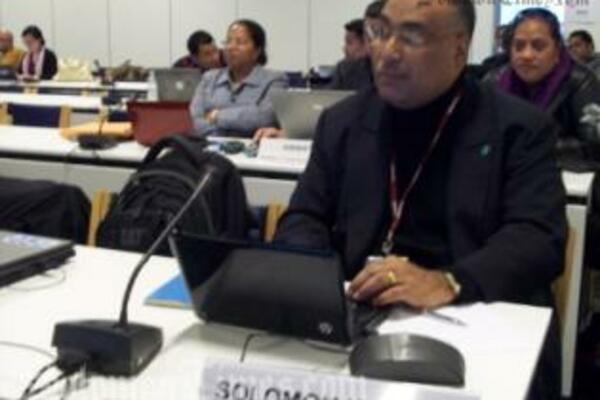 Ambassador Beck believes that a deal will be reached during the summit, a consistent view reiterated by the Alliance of Small Island States (AOSIS).
Source: Photo Supplied
Share
Monday, 07 December 2009 07:00 AM

Failure in Copenhagen is not an option in seeking a legally binding international agreement when world leaders meet next week to discuss a new climate change deal, said Collin Beck, Ambassador and Permanent Representative of Solomon Islands to the United Nations.

Speaking ahead of the start of the United Nations Framework Convention on Climate Change (UNFCCC), Ambassador Beck believes that a deal will be reached during the summit, a consistent view reiterated by the Alliance of Small Island States (AOSIS). It needs the political will to do that and remains positive this can happen.

"Everyone will be working round the clock to make Copenhagen meeting a success," he said following an AOSIS pre-session meeting at the Bella Centre, the conference venue.

Thursday's meeting addressed a number of sticking points including analyzing and strategizing AOSIS positions ahead of the negotiations scheduled for next week.

He said AOSIS as a group discussed political dynamics occurring around Copenhagen meeting and their possible implications. This includes the recent Commonwealth Heads of Government Meeting (CHOGM) in Trinidad and Tobago, Pre COP session attended by selected countries, the Maldives meeting amongst others.

While welcoming a recent proposed climate change fund amounting to $10 billion by some developed countries, Solomon Islander diplomat said "we welcome the funds but there is a lack of details how much is from public funds? How will it be managed under the UNFCCC process or institutions outside the Climate Change framework including the World Bank, GEF or bilateral programmes"?

"On the question whether $10 billion is sufficient, it's not sufficient," he remarked. He said the United Nations Development Programme (UNDP) made an estimate of $86 billion per year is needed for adaptation alone. If one makes a calculation based on UNDP figures, for the period 2010 and 2012, we will need at least 28.6 billion a year. From that amount if 10% is allocated to SIDS, AOSIS should get at least 2.86 billion for adaptation programme alone.

More funds will be needed for mitigation and technology transfer programmes. "Whilst the financial figures are still inadequate it is a figure on the table, Copenhagen provides us the opportunity to engage with our partners and build on it. We also need to get a balanced and comprehensive outcome. To do so, we must not lose sight on getting a more ambitious target from Annex 1 Parties if we are serious of stabilizing current emissions of green house gas. So far current commitments fall below the IPCCC range".