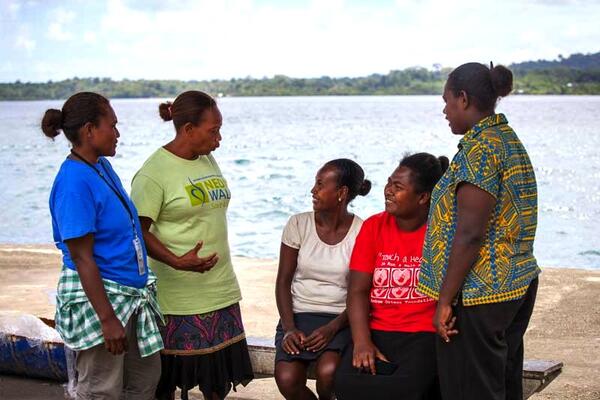 There’s no shortage of women now willing to speak about the benefits of financial literacy. Prudence is 3rd from right.
Source: womensmediasolomonislands.com
Share
Tuesday, 12 March 2019 07:06 AM

Prudence Tekurade is 28-year-old mother of three who saved enough from her job at SolTuna, the Solomon Islands’ only tuna processing plant, to buy a plot of land.

With a purchased land, she is putting money away to build a house that she plans to rent for extra income - Prudence Tekurade is a woman on a mission.

But Tekurade wasn’t always so thrifty. Spending, not saving, was her habit. “When I got my pay, I just took the money,” she says. “I finished all the money. I never had any savings. Now I keep my savings in the bank.”

Tekurade’s former attitude toward her earnings used to be common among the women who work at SolTuna, one of the island’s largest private employers. Women comprise two-thirds of the workforce and, until recently, many had already spent their money by the time payday came around. Some would skip their shifts at SolTuna and head to the market to sell fish, produce, or other goods to earn quick cash and put food on the table.

SolTuna’s high rate of absenteeism—18 percent—took a toll, says the company’s plant operations manager, Suzy Aquino. “On Mondays it was a very poor turnout,” she says. “On Tuesdays, it was better, and then on Wednesdays and Thursdays we were at our peak. The numbers went down again on Fridays.”

The fewer women showed up to work, the less fish SolTuna could process. Production targets were nearly impossible to hit. This, combined with high energy and shipping costs, made it hard for the company to compete with tuna processors in Thailand and the Philippines. That was impacting the company’s bottom line.

After providing a $10 million loan to SolTuna—to help it upgrade and expand its processing capacity—IFC worked with the company to raise its environmental and social standards, which included tackling the absenteeism issue.

As IFC worked with SolTuna, it became clear that there were many factors contributing to women’s absenteeism. In addition to skipping work to earn additional income at the market, many women were balancing their jobs with the needs of sick children or elderly family members. Others were missing work because of violence at home. In Solomon Islands, an estimated two out of three women experience domestic and family violence in their lifetime.

SolTuna then adopted a structured approach to supporting workers who faced domestic and family violence. It trained a team of first responders on how to handle disclosures of violence at work and strengthened the procedure for reporting and resolving grievances. The company is also implementing a respectful workplace policy, to address sexual harassment and bullying.

Alison Anawe, a line supervisor at SolTuna for 15 years, says she and her colleagues used to feel ill-equipped to deal with these issues.

With IFC’s support, SolTuna also rolled out a financial literacy training program, in which more than 60 percent of the workforce participated. It has helped employees learn to budget, save, and understand their pay slips—as well as the company’s bonus program, which incentivizes good attendance.

There’s no shortage of women now willing to speak about the benefits of financial literacy. Mary Geri, who works on the production line, has saved enough to set up a small trade store in a nearby village, selling rice, biscuits, and other goods. The mother of three—whose eldest is also an employee at SolTuna—says her husband now works “for her” in the store. Geri continues to save, keeping the money in a locked box at home. She’s thrown away the key and plans to break the box open at year’s end.

“Before I didn’t really understand that domestic violence is a crime.” — Alison Anawe, production line supervisor at SolTuna

Previously, SolTuna’s women workers were most visible in the office or on the production line. The company has more than doubled the number of women in jobs traditionally held by men. And women are now in four of the five top positions in production and quality control.

“A diesel fitter, a plumber, an electrician—all women,” says SolTuna’s managing director, Adrian Wickham. “We invest heavily in their training and we are seeing the benefits.”

The company has also developed new export markets, including the United States, and has expanded its workforce to more than 2,000 employees, from 1,800 a few years ago.

The ripple effect reaches other businesses. Fifteen of the largest companies in Solomon Islands, which collectively employ more than 6,000 workers, have now committed to promoting gender equality in the workplace through a program known as Waka Mere (“She Works” in the local language). This two-year initiative, launched by IFC in 2017 in collaboration with the Solomon Islands Chamber of Commerce and Industry, recognizes the many benefits of empowering women. It is supported by the governments of Australia and New Zealand.

“Attitudes continue to be slow to change in patriarchal societies like Solomon Islands,” says Atenasi Ata, Chief Executive Officer of the Solomon Islands Chamber of Commerce and Industry. “But we are seeing the clear signs of change. Women are ready and able to embrace that change to the benefit of not only themselves, but their communities and the country.”