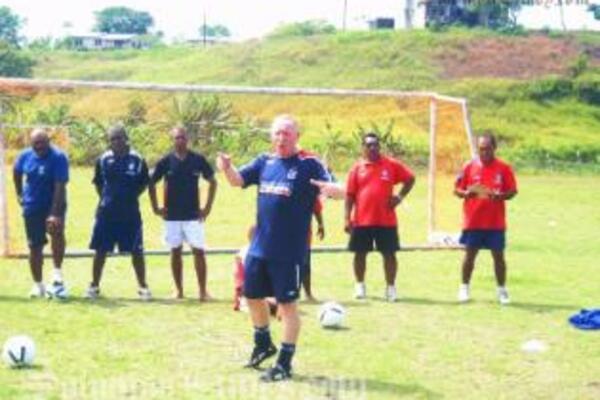 John Alpress, during the FA course which ended in a high note yesterday.
Source: SIFF Media
Share
Wednesday, 09 December 2009 11:36 AM

The three-day course extended from the junior level certificate held last week. Both courses were run under the SIFF FA Memorandum of Understanding which is a four-year football development partnership between the Solomon Islands Football Federation (SIFF) and the English Football Association.

The MOU was signed in 2006 and the first course was held in 2007. Under the partnership, SIFF is responsible for meeting the local administrative costs of the courses including accommodation and day to day transport costs.

The FA courses are a major component of the SIFF technical development calendar and are normally held at the end of each year. More than 100 coaches in Solomon Islands have undergone training under the SIFF English FA partnership. This includes 4 who attended football coaching training in England after graduating through FA courses held in Honiara.

The FA International Coaching Award Intermediate Level course encompasses advanced football techniques including areas like game psychology. Player profiling was introduced to the coaches in the course to help the advanced development of players.

According to participant Victor Waiia, this is an important aspect of modern football and will greatly help in addressing the individual needs of players. Advanced as it is the course also reiterated the basic football actions like the mechanics of passing and receiving.

Speaking at the closing ceremony course leader, John Alpress, commended the participants for their ability to communicate with young footballers. Alpress also said that he has felt very welcome since arriving and enjoyed working with the local coaches in the 2 programs that have been run. Alpress called on the coaches to continue working with the children in the communities.

A representative of the participating coaches, Jimmy Luitolo, expressed his appreciation towards the English FA and SIFF for the course. 'We have learnt many new things which certainly will make us better coaches,' Luitolo said. Luitolo also appealed to his fellow participants to make use and share the knowledge they have gained so the football can be developed in the communities.

The SIFF General Secretary, Eddie Ngava, offered his gratitude to the English Football Association for continuing their work under the MOU. Ngava said that football creates an unique opportunity for coaches to help young children with the social well being as well as their development as young footballers.

Ngava challenged the coaches to bring out the fun and laughter in football to the kids when they coach in their communities. 'Football is about fun and laughter and this must be realized,' Ngava said.

Eddie Ngava also commended the 3 women who participated in the FA International Coaching Award Intermediate Level course. 'The acceptance of these women in the course is evident that men appreciate the fact that women can and want to play the World Game even in Solomon Islands.'