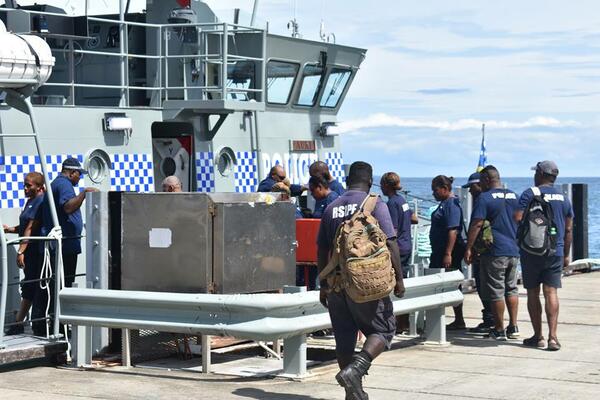 The local Police will assist Solomon Islands Maritime Authority (SIMSA) to monitor boats and vessels for over loading as voters travel to provinces to cast their ballots in the National General Election (NGE) on 3 April 2019.

“To avoid incidents at sea the general public in Solomon Islands who will travel to the provinces to cast their votes are urged to start organising themselves as police are observing boats and vessels for overloading of passengers and cargoes” says Assistant Commissioner Mostyn Mangau of the Royal Solomon Islands Police Force (RSIPF).

He says: “This is a safety message for boat owners and vessel Masters to ensure passengers and their vessels' safety is guaranteed when travelling at sea.”

He adds: “Overloaded boats and vessels that are found by police will not be allowed to leave port or continue their journey unless they reduce their load in compliance with section 22 of the Shipping Act”.

AC Mangau also appeals to the general public across the country to work together with the police and SIMSA by reporting overloaded boats and vessels to the following phone contacts: 21609 or 27685 or Toll free 977 of SIMSA; and Police 23666 or Toll Free 999.

Meanwhile, additional police officers have been deployed to Malaita Province for the National General Election (NGE) 2019.

This is the first of deployment of officers to the provinces to assist provincial police commanders provide security during the NGE.

Assistant Commissioner for the NGE National Police Operations, Mostyn Mangau says, “A total of 44 officers of the Royal Solomon Islands Police Force (RSIPF) from Honiara left on 23rd March for the NGE operation.

“The details of the total figure is that fifteen officers have been airlifted to Auki on board an Australian Defense Force (ADF) helicopter, and 29 officers left on board the RSIPF Vessel (RSIPFV) Auki to assist police officers posted in Malaita Province for the lead up events, awareness talks and surveillance duties at various venues designated as polling stations for the NGE in that Province. These officers will also remain in Malaita Province for the duration of the NGE," says AC Mangau.

He says, “I appeal to community leaders in Malaita Province to work together with the police to ensure the NGE-2019 is a crime free occasion, that every eligible registered voters in that Province exercise their democratic rights to cast their ballot papers according to law in a peaceful manner.”

The Assistant Commissioner says that more deployments of RSIPF officers to other provinces in the country for NGE duties will happen in coming days before 3 April 2019.