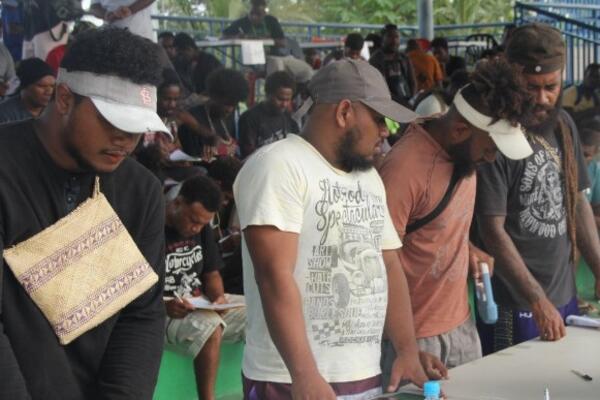 Hundreds of hopeful applicants are in Honiara, going through interviews, paying fees for medical clearance and putting together other required documents.
Source: File: SIG Portal
By Jimmy Nolan
Share
Thursday, 19 August 2021 09:37 AM

It has come to light that certain government officers are exploiting the desperation of those seeking to join the seasonal worker’s scheme.

An applicant has described the demand for upfront payments by some officers as evil and heartless.

“I was asked by an officer to pay some money to fast track some required documents, they called me on my phone and said if I want the document fast then I need to pay.

“I was very upset because when I went for the interview, everything went well, when I was shortlisted and asked to do physical tests, I was very happy because I knew my chance is high. Those that handled the recruitment part were very professional and very helpful,” said the applicant.

“The problem started when we deal with other people to get clearance and other documents, it became too much for me. I was asked to pay money everywhere I go, people who want their things done fast have to pay.

“When I was called to give some money, I was very angry, I told the guy off and he said ok good luck lo iu.”

Calls were made to government agencies responsible for such documentations, those spoken to deny such allegations, one officer was upset stating that they work overtime to help these applicants get what they need.

She said that it is possible that some officers are asking for money, but “most of us try our best to help without demanding money, so do not just cover all of us as corrupt.”

“I think people who want to get things fast and go ahead of others are the ones that cause the problem, because maybe they are the ones offering money for fast tracking their things,” she said.

Hundreds of hopeful applicants are in Honiara, going through interviews, paying fees for medical clearance and putting together other required documents. It seems obvious that they are desperate for a better life, a life where they can provide for their families and loved ones.

The seasonal workers scheme in Australia is probably one of the best things to happen to rural families in Solomon Islands. Families are now able to dream of a better home or a better education through remittances sent back from these seasonal workers.

Corruption is certainly a big problem - kickbacks and bribes are now so normal people sometimes do it openly. If it is true that such desperate people are being asked to pay bribes, then that’s just a new low, to an already corrupt system.