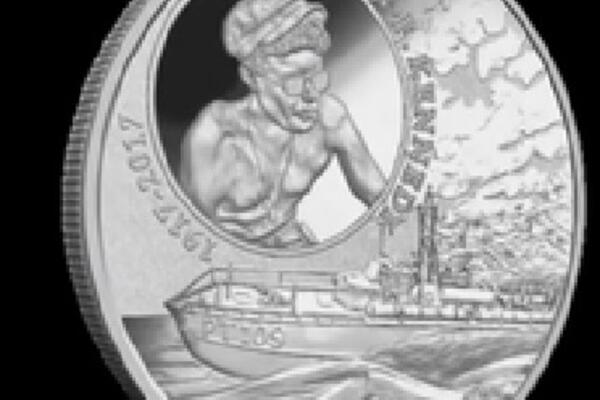 The design of this wonderful coin pays tribute to the act of endurance, heroism and leadership shown by Lieutenant John F. Kennedy in 1943 during WWII in the Pacific, specifically the Solomon Islands.
Source: Photo supplied
Share
Monday, 09 January 2017 08:06 AM

The design of this wonderful coin pays tribute to the act of endurance, heroism and leadership shown by Lieutenant John F. Kennedy in 1943 during WWII in the Pacific, specifically the Solomon Islands.

On August 2, 1943, Lt. Kennedy’s crew was patrolling in the waters of the British Solomon Islands. Suddenly a Japanese frigate appeared and was heading straight for Kennedy’s boat at top speed. Piloting the ship, Lt. Kennedy attempted to avoid collision, but there wasn’t enough time. The much larger Japanese destroyer crashed into Boat PT-109 and split it in half. Nearly the entire crew was thrown into the water by the force of the collision. Two men were killed, and one man was badly burned.

For two days they survived on a small desert island living off coconuts. The chance of a rescue seemed increasingly remote.

On 5 August, Kennedy, and his colleague George Ross decided to swim in the ocean to nearby islands for food and water. On their way to a another island, they noticed two people in a canoe – a man named Kumana and his friend Biuku Gasa, the native Coastwatchers based across the Pacific Islands at the time. Gasa taught Kennedy the method to scratch a message on a coconut which proved useful to relay a message to a U.S. base for rescue. The message read: ”Nauro ISL Commander... native knows posit... He can pilot...11 alive need a small boat... Kennedy”. Kumana and Gasa took the coconut from Kennedy and using just their small canoe, they risked their lives to deliver the message to the nearest base. The next day, John F. Kennedy and the PT-109 crew were all rescued.

The memory of Kumana and Gasa who saved the life of J.F. Kennedy lives in the engraved coconut husk, which Kennedy used as a paperweight on his desk in the Oval office when he was president, and is now placed at the John F Kennedy Presidential Library. Kennedy is also personally memorialized in the Solomon Islands – the island where Kennedy’s boat was crushed is now called “Kennedy Island”.

For his courage, Kennedy was awarded the Navy & Marine Corps Medal. When this story was finally told to the public, many Americans were amazed by the significant bravery and strength of their president, and they believed this was the foundation of his memorable leadership. John F. Kennedy was admired by countless people as an individual who appealed to the Nation’s highest ideals and also inspired many young Americans with the desire to work in the country’s public service.

Elected in 1960 as the 35th President of the United States, John F. Kennedy became the youngest man to ever hold office, and he went down in history as one of the most respected and influential politicians. His words are still repeated today to inspire service for the country. For this reason, the Royal Australian Mint launched this coin to pay tribute to John F. Kennedy’s legacy, and to celebrate the 100th anniversary of his birthday.

There are several bullion features which make the John F. Kennedy JFK Solomon Islands $1 Coin a highly desired collectible coin on the marketplace. Produced by the Royal Australian Mint, this $1 coin is legal tender of the Solomon Islands. This remarkable silver coin is made of the purest .999 silver with a frosted finish, has a limited mintage of 15,000 pieces, a denomination of $1 dollar and an impressive coin diameter of 40.00 mm, allowing every detail of the coin to look stunning.

The obverse side, designed by Stevan Stojanovic, depicts the PT-109 boat and a portrait of young Lieutenant John F. Kennedy completed with the inscriptions: “1917-2017,” “ONE DOLLAR,” and ”JOHN F. KENNEDY".

The reverse side features the effigy of Her Majesty Queen Elizabeth II, completed with the inscriptions: “2017,” “SOLOMON ISLANDS,” “ELIZABETH II".

Bullion Exchanges is excited to be a partner with one of the leading refiners in the world – The Royal Australian Mint. They are please to give an exclusive opportunity for eager collectors to diversify their portfolios with this magnificent John F. Kennedy JFK Solomon Islands $1 Coin!