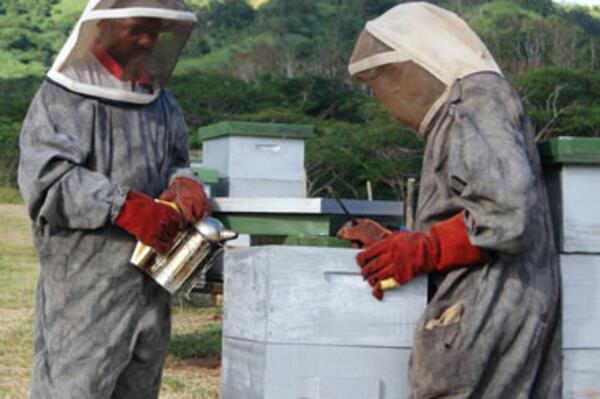 Source: www.spc.int
By Secretariat of the Pacific Community
Share
Wednesday, 09 October 2013 08:30 AM

The European Union (EU) is helping develop bee farming in the Northern Division of Fiji by providing support to the Northern Bee Farmers Co-operative (NBFC), a local body set up to look after the welfare of bee farmers.

Through the Increasing Agricultural Commodity Trade (IACT) project, the EU has provided NBFC with bee farming and honey production equipment that is now being used by around 70 apiary keepers who are members of the co-operative.

Besides this, the old building currently used by NBFC will undergo renovations to house a new office and a proper honey processing centre. The refurbishment, also supported by the EU, is currently under way.

NCBF President, Sevuloni Debalevu, describes the assistance provided by the EU as a ‘huge encouragement’ for bee farmers in the north, as well as for the honey industry in the country. He added that such support will help increase production and income for NBFC members.

‘The assistance of an extra 350 hive units and other equipment will help farmers to produce an additional 7000 kg of honey annually in the Northern Division,’ he stated.
Debalevu says that this sort of support will entice farmers who had previously left the industry to return to bee farming. Since NBFC was selected for assistance under the IACT project in 2012, there has been growing interest among bee farmers to join the co-operative.

Over the years, one of the major drawbacks was the lack of a regular market for honey – a problem that Debalevu says has been solved since the formation of NBFC.

‘In the past, finding a market for honey was hard. Now, NBFC buys honey directly from the bee keepers, which ensures them a regular income,’ he said.

Mere Dunadamu, an experienced bee keeper from the Northern Division, agrees. She runs a small bee farm of around a dozen hives in Vunivau, Labasa. She supplies around 60 kg of honey per month to NBFC during the harvesting period which is mostly in the second half of the year (June–December).

The co-operative buys honey from bee keepers around Vanua Levu and sells it on to larger retail outlets in the local market.

The local demand for honey remains high, which, according to Debalevu, should act as an incentive for local farmers to produce more honey. If production levels can be increased significantly in the future, then NBFC hopes to start exploring exporting opportunities.

With support from the EU, NBFC has been advising farmers on improving the quality of honey so that they get better prices for it. Further training for bee farmers is in the pipeline.

While Dunadamu admits that being a bee farmer requires proper training, skills and knowledge about bees, she says it is also one of the most exciting forms of farming, and can easily be taken up by women and youth groups.

Dunadamu, who has spent almost a decade as a bee keeper, says that women should be encouraged to take up bee farming as a means of earning an income for their families.

‘All we do is to learn best farming practices and a big part of the job is done by the bees,’ she added.

She went on to say that women can take up bee farming because it does not require them to spend several hours of a day out in the field. They can easily run a bee farm and also find time to spend with their families.

The Increasing Agricultural Commodity Trade (IACT) project, which is implemented by the Land Resources Division of the Secretariat of the Pacific Community, aims to strengthen the export capacity of Pacific countries in the primary industries of agriculture, forestry, aquaculture and livestock.