Ethel Sigimanu Recognized for Her Work 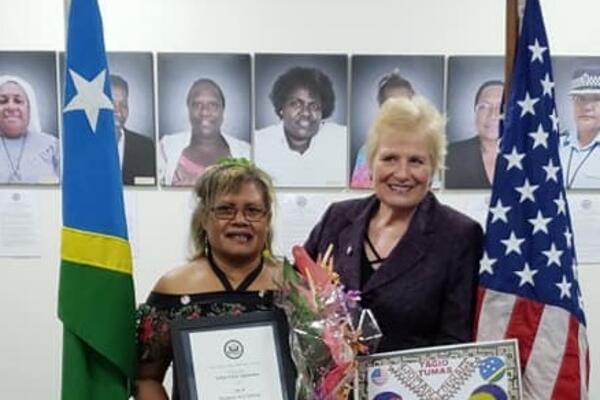 Permanent Secretary for the Ministry of Justice and Legal Affairs Mrs Ethel Sigimanu was awarded the 2019 Women of Courage by the United States non-resident Ambassador Catherine Ebert Gray at a ceremony held at the Heritage Park Hotel.

Ambassador Gray described Mrs Sigimanu as someone “who braved a male dominated working environment, stood her ground and fought for women’s rights and gender-based violence in the Solomon Islands.”

Mrs Sigimanu says that she is humbled to receive the award, and now joins a list of women of courage awardees in the Solomon Islands and around the World.

The International Women of Courage Award, also referred to as the U.S. Secretary of State's International Women of Courage Award, is an American award presented annually by the United States Department of State to women around the world who have shown leadership, courage, resourcefulness, and willingness to sacrifice for others, especially in promoting women's rights.

The award was established in 2007 by U.S. Secretary of State Condoleezza Rice on International Women’s Day, an annual celebration observed each March 8 in many countries worldwide. Each U.S. Embassy has the right to recommend one woman as a candidate.