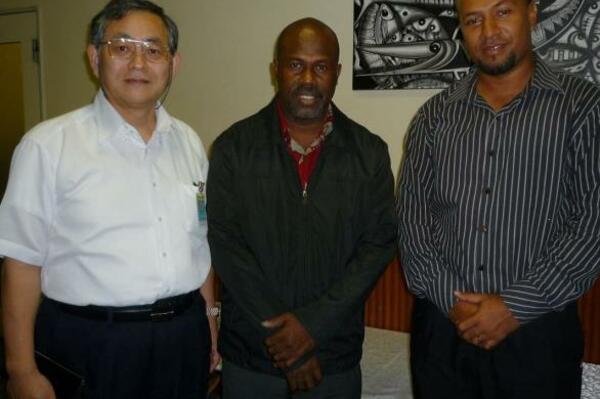 The Pacific Islands Leaders' Meeting with Japan is a summit-level meeting held every three years since 1997.

The Deputy Prime Minister is accompanied by the Deputy Secretary of Foreign Affairs and External Trade, Mr. William Soaki.

In 2012, at PALM 6, the leaders agreed on the need for a comprehensive response to climate change adaptation in the Pacific, and on the importance of promoting sustainable development based on human security through the Millennium Development Goals (MDGs).

The PALM7 Summit will be co-chaired by Prime Minister Shinzo Abe of Japan and President Tommy Remengesau of Palau.

Under the guidance of Prime Minister Abe and President Remengesau, Disaster Risk Reduction, Environment, Climate Change, Maritime Issues and Fisheries and People to People Exchanges will be the top issues for discussion during the summit.

Trade, Investment and International Cooperation will also be other areas to be focused on during the summit.

During the Summit, Pacific Island Leaders will have the opportunity to meet Prime Minister Abe for bilateral talks to discuss matters relating to the cooperation between each Pacific Island countries and Japan.

Solomon Islands is scheduled for the bilateral talks on 23 May 2015.

The summit will be concluded with the adoption of the Leaders Declaration to be followed by a summary of discussions by Prime Minister Abe of Japan.