Engelhardt: The Man Who Founded a Coconut Cult 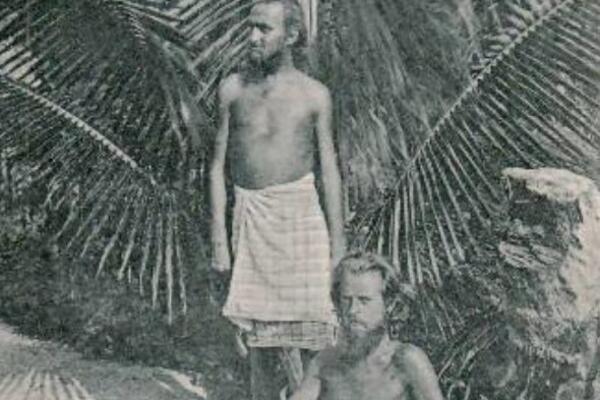 The Coconut Tree carries a label that is probably the envy of other trees, or palms for that matter – "The Tree of Life."

Solomon Islanders would attest to this, many depend on it for various uses – income for rural communities, nourishment (as it is a natural source of quick energy), and, of course, cooking.

Coconuts have been on the Islands for a very long time, longer than some of the sea voyagers that crossed the vast ocean to call these beautiful Islands their home. And yet, no creation myth or traditional stories or dance or oral stories has elevated the status of the fruit beyond being just a fruit!

Yes! we are talking religion, or more appropriately a cult movement. There are no records of such in the Solomon Islands – people were probably too busy enjoying the fruit. But has anyone ever tried though?

Enter August Engelhardt, obviously not from Solomon Islands, but was equally passionate about the fruit – to a point where he attempted to start a coconut cult. In the early 20th century, the 26-year-old German set out to build a utopian, sun-worshipping sect, one where members would eat nothing — and absolutely nothing — but coconuts.

Born in 1875, Engelhardt was a disaffected chemistry and physics university student who subsequently became a pharmacy assistant. There, he became deeply engrossed in the popular Lebensreform ("life reform") movement that rejected Germany's ever-advancing industrialism, embracing back-to-nature ideals, such as alternative medicine, raw foods, sexual liberation and the rejection of mind-altering substances and vaccines.

He had a very, very long beard. He didn't wear very many clothes. Both attributes cast him as a hippie of sorts in an ultra-stodgy European society. He spoke publicly of his beliefs, for which he was roundly ridiculed, but still, he remained undeterred in his spiritual and nutritional quests.

In 1898, he co-authored a book with the unwieldy title of, "A Carefree Future: The New Gospel; Glimpse Into the Depth and Distance for the Selection of Mankind, for the Reflection of All, for Consideration and Stimulation," which was packed with lifestyle ideals and even poems with titles like, "Mother Coconut," "The Coconut Spirit," and, of course, "How to Become a Coconut." He hoped to attract like-minded vegetarians to join him in an escape to the South Pacific, far from the reach of their restrictive homeland.

Thanks to a substantial inheritance, Engelhardt had the means to pursue his coconut-crazed dreams. He bought 185 acres (75 hectares) on Kabakon, a small sparsely-populated island located between what is now Papua New Guinea and the Solomon Islands. He took along his library of 1,200 books, discarded all clothing, and began living in a simple hut. He purchased, of course, a coconut and banana plantation, one that never really made any money.

Engelhardt was certain that the bright tropical sun hanging overhead was the life source of the universe, and that in doing away with clothing, he was bringing himself closer to healthy living. He was convinced that the brain, being closest to the sun, was humankind's most important organ, elevated above the dark recesses of the gut. And because coconuts had a passing resemblance to the human head and grew at the tippy tops of sun-loving trees, he believed that these nuts were the grandest of all Earth's harvests, containing everything that the body required for nourishment. So, that's all he ate.

While coconuts have good amounts of fat and carbs, they are lacking in Vitamins A, K, B6 and B12, as well as calcium. A cup of coconut meat only has about 3 grams of protein or 5 percent of your daily requirement. Assuming three or four cups in one coconut, Engelhardt would have had to eat more than 14 coconuts a day to get enough protein for his 5 foot 8 inch (1.7 meter) frame.

In 1902, August Engelhardt moved from Germany to Kabakon Island in Papua New Guinea where he started a coconut-eating, sun-worshipping sect. He invited Europeans to join his cocovore paradise. He was famous for his library of classical and modern texts - one of the best in the pacific.

Not that knowing such mundane nutritional data would have deterred Engelhardt. "He held that man was a tropical animal, not intended to live in caves called houses, but to wander, as Adam did, with the sun beating upon him all day and the dews of heaven for a mantle at night," explained a 1905 New York Times story sensationally titled "Failure of a Womanless Eden in the Pacific — A Strange Story from the South Seas." Engelhardt believed that living such a life "would in time render a man so immune that sickness could be overcome" and he would conquer death "and be as gods," The NYT wrote.

The Order of the Sun

Engelhardt's self-created cult was called Sonnenorden (Order of the Sun), and he wrote letters that ultimately convinced about 15 people to join him at his sun-soaked paradise. Don't fear malaria, he wrote to his prospects, the warmth of the sun and the curative powers of the coconut will heal whatever ails you.

Two of those converts were particularly noteworthy. One was Heinrich Eukens, a 24-year-old vegetarian smitten with Engelhardt's extreme lifestyle. The other was Max Lutzow, once the conductor and a player in the well-regarded Lutzow Orchestra of Berlin.

Eukens plunged into the sun worshipping, coconutiness with a fanatical flair, but his constitution wasn't able to withstand the abrupt physical changes. Within weeks, he dropped dead. The sect's other followers were appalled but carried on.

Lutzow, on the other hand, got on famously with the island's leader, but for one detail – he'd brought along his music collection and often played pieces that grated on Engelhardt's nerves. After one quarrel, Lutzow wound up stranded on a mission boat far from shore, and since there was no fresh fruit on board, he refused to eat. By the time he returned to land, he was feverish beyond repair, perishing under the hot sun.

Other worshippers met their end in similar fashion, through sunstroke, drownings and, of course, malaria, because the sun most definitely did not serve as an adequate substitute for quinine. In a bit of nutty irony, at least one cultist died after being struck by a falling coconut.

Those who didn't perish fled the island, leaving their leader to a solitary existence. The German government, aware of Engelhardt's lunacy, actively forbade other wayward youths from similarly grim endings.

Engelhardt himself continued, certain that his followers died simply because they'd cheated on their mono-coconut diet, polluting their bodies with impurities and poisons from other food sources. But his health, too, was failing. Photographs, some taken by tourists who went out of their way to visit the solitary madman, show the sect leader as little more than a bearded bag of bones, his skin erupting in lesions and deformities clearly demonstrating his nutritional inadequacies.

Eventually, even he was too weak to refuse modern medical care, and a local doctor was able to nurse him back to health in Papua New Guinea. Engelhardt rewarded his physician's painstaking efforts by escaping back to his island and his cuckoo-for-coconuts ways, managing to survive until the outbreak of World War I in 1914.

The following year, he was captured as a prisoner of war, but released from camp at least in part because he was so clearly mentally ill. Still, he carried on, until 1919, when his body could no longer tolerate malnutrition.

He died at age 44, and he reportedly weighed less than 70 pounds (31 kilograms) when he was found. Not a good ending, but probably the only ending for such a religion.

Includes extracts from the article The Curious Case of August Engelhardt, Leader of a Coconut-Obsessed Cult BY ZOË BERNARD NOVEMBER 30, 2017 in atlasobscura.com.