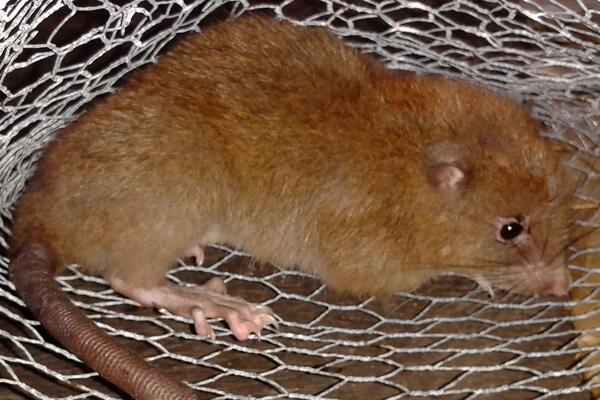 It immediately joined the list of the biggest rats in the world, as it weighed about a kilogram – four times more than an ordinary rat – and measured 47 cm long.
Source: Tyrone Lavery/The Field Museum
Share
Monday, 16 October 2017 08:05 AM

A dedicated scientist has finally, by chance, stumbled upon proof that mythical giant tree-dwelling rats do indeed inhabit the rainforests of the Solomon Islands, after trying unsuccessfully to verify the legend for years.

Since 2010, Dr Tyrone Lavery, of The Field Museum in Chicago, had been setting up cameras mounted in trees and traps to find the rodent, called ‘vika’ by the locals, to no avail.

Finally, earlier this year, he caught an injured specimen as it scurried out of a tree felled by loggers.

It immediately joined the list of the biggest rats in the world, as it weighed about a kilogram – four times more than an ordinary rat – and measured 47 cm long.

“The discovery marks an important moment in the biological study of the Solomon Islands, especially since vika is so uncommon and close to extinction.

“Finding a new mammal is really rare – there are probably just a few dozen new mammals discovered every year.

“Vika was so hard to find, and the fact that I was able to persevere is something that I’m proud of.”

“When I first met with the people from Vangunu Island in the Solomons, they told me about a rat native to the island that they called vika, which lived in the trees,” he said.

“I was excited because I had just started my PhD, and I’d read a lot of books about people who go on adventures and discover new species.”

The scientist came close to giving up after years of fruitless searching. His camera traps never captured anything but common black rats.

“I started to question if it really was a separate species, or if people were just calling regular black rats ‘vika’.”

The giant rat probably evaded detection because of its tiny population and its tree-dwelling lifestyle.

The orange-brown rat dines on nuts and fruit, has short ears, a smooth tail with very fine scales and wide feet that allow it to move through the forest canopy. It is reputed to chew holes in coconuts to eat the inside.

Dr Lavery said the species will soon be designated as critically endangered, due to its rarity and the threat posed to its rainforest habitat.

“It’s getting to the stage for this rat that, if we hadn’t discovered it now, it might never have gotten discovered. The area where it was found is one of the only places left with forest that hasn’t been logged,” he said.

“It’s really urgent for us to be able to document this rat and find additional support for the Zaira Conservation Area on Vangunu where the rat lives.”

Dr Lavery said he knew it was a new species as soon as he inspected the specimen. He made an official finding by comparing the specimen to similar species in museum collections and checking the new rat’s DNA against the DNA of its relatives. He named it Uromys vika in honour of the local name for the rat.

“There are only eight known species of native rat from the Solomon Islands, and looking at the features on its skull, I could rule out a bunch of species right away.

“Vika’s ancestors probably rafted to the island on vegetation, and once they got there, they evolved into this wonderfully new species, nothing like what they came from on the mainland.”

The world’s largest rodent is not a rat, but rather South America’s barrel-shaped capybara.

Dr Lavery reported his discovery in the Journal of Mammalogy on September 27.