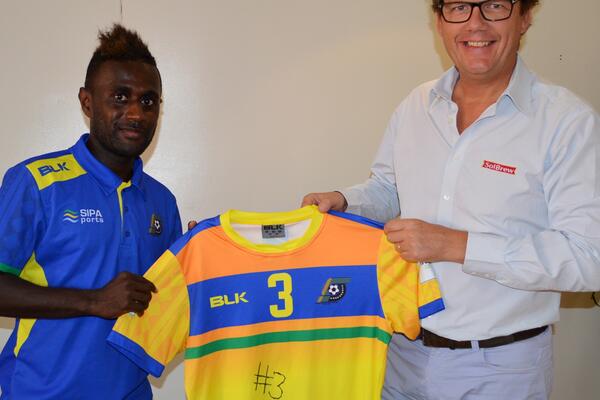 Solomon Islands Kurukuru Captain Elliot Ragomo on his return from the FIFA Futsal World Cup 2016 in Colombia, gifted Solomon Breweries his Solomon Islands National Futsal jersey in thanks for their support.

Elliot expressed his appreciation for the sponsorship support and pride in being an integral part of the Solomon Breweries recent Drink Responsibly campaign.

He said that it was the first time for him to be involved in a campaign like this and having people in Colombia see the Drink Responsibly campaign on Facebook and recognise him as a Drink Responsibly Ambassador made him really proud. It has also made him realise the responsibility he has to always set an example and to be the very best he can be in all areas of his life.

Solomon Breweries GM Jan Arie Smit thanked him for the autographed jersey and said Solomon Breweries was very happy and proud to support him, “I can tell you when the world cup was on our staff were following you and the Kurukurus closely on TV, we’re very proud to have partnered with you for our Drink Responsibly campaign and hope that your personal story will help others see why drinking responsibly is a must. We look forward to working together in the future to build on our Drink Responsibly campaigns, and we would like to wish you all the best for the future.”