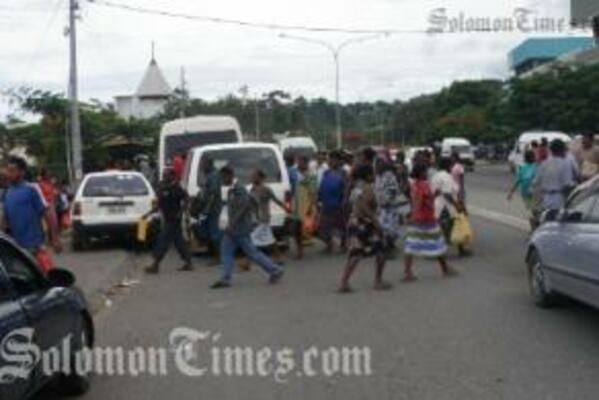 As the election fever hits the Solomon Islands, people and candidates alike have been urged to keep it peaceful.
Source: Archives
Share
Tuesday, 27 July 2010 08:46 AM

Chief Electoral Officer, Mr Polycarp Haununu, has issued a warning to candidates to respect electoral laws and keep their campaigns peaceful and fair in the week leading up to the National General Election.

"My office has received reports from some Returning Officers that voters in their constituencies are being intimidated by the campaigning of some candidates," Mr Haununu said.

The Returning Officer for North West Guadalcanal tonight issued a service message on SIBC to contesting candidates in his constituency to avoid using bullying tactics in their campaigning.

Returning Officer, Mr Benjamin Inukoru, said that concerned voters had spoken to him about stories of rock throwing, swearing and other intimidating practices being used by some candidates and their supporters.

Chief Electoral Officer, Mr Haununu said that he would be taking the matter to the police.

"Holding a free, fair and safe election is a serious matter and the responsibility of us all," Mr Haununu said.

"Both the Electoral Commission and the police have been very clear about the need for people to respect the law and conduct themselves in a peaceful manner during this important national event," Mr Haununu said.

"Every registered voter has the right to cast one vote to choose a representative of their choice, freely and fairly and without intimidation or harassment."

Mr Haununu urged voters and candidates across the country to participate in an election that would make Solomon Islands proud.