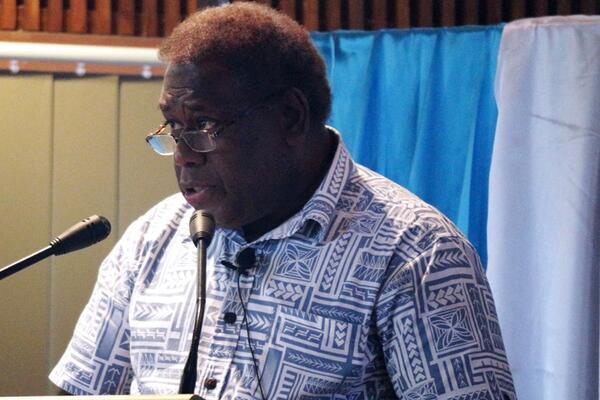 CBSI Governor, Mr Denton Rarawa, at the launch of the report at the Mendana Kitano Hotel.
Source: Supplied
Share
Tuesday, 21 May 2019 10:42 AM

The Central Bank of Solomon Islands (CBSI) projects the economy to grow by 3.7% in 2019.

This was highlighted in the Bank’s 2018 Annual Report launched by Governor, Mr Denton Rarawa in Honiara on Monday 20th May 2019 at the Mendana Kitano Hotel.

According to the report, the slower growth outlook reflects the key assumption that the forestry sector will finally decelerate as part of the Government’s sustainability initiatives.

“Nevertheless, growth during the year is projected to be driven by the services sector, especially wholesale retail and transport that is related to the major pipeline projects.

“Major construction activities, manufacturing and the onset of new mineral production within the secondary sector, and fisheries in the primary sector will also contribute to growth for the year,” the report highlighted.

The outlook for the external sector in the near term is for a widening of the current account deficit and is associated with the higher imports for the major construction and mining projects.

The report further highlighted that this will have a dampening effect on the overall BOP position, although with a projected reduced surplus, as capital and financial inflows are anticipated to remain positive. Accordingly, the Gross External Reserves is expected to expand over $5 billion.

“Similarly, monetary conditions are expected to remain positive. Reserve money is projected to trend upward to $3.2 billion, aided by the expected rise in CBSI’s net foreign assets. While broad money will moderately grow by 5% to $5.5 billion accompanied by expected slower credit growth. As such, excess liquidity will continue to rise over the forecast horizon,” the report said.

While, the outgoing government passed a balanced budget of $3.93 billion for 2019 as part of its fiscal consolidation measures, CBSI expects a new government formed after the April elections to undertake an expansionary fiscal stance, as it cements itself to carry out its new projects.

According to the Banks’s 2018 Annual Report, due to the rebuilding of the fiscal buffers during 2018, and timing constraints to fully implement its activities, a fiscal surplus balance is anticipated for 2019.

While external prices are projected to slow due to the expectation for slower global oil and commodity prices, domestic price pressures are expected to weigh heavily on consumer prices.

This is related to potential supply disruptions due to chaotic weather conditions, and higher utility costs. Moreover, structural changes to the Consumer

Near term risks to the economic outlook weigh prominently on the downside. This include the potential for the global slowdown to severely affect the country’s exports.

On the domestic side, the sustained impact of the CRB could destroy the future productivity capacity of young palms, while, an indecisive fiscal stance could taper consumer demand.

“Moreover, structural issues need to be addressed by the government to mitigate the economy’s long-term risks and vulnerabilities,” the CBSI Annual Report stated.

On the monetary front, slower credit could hinder growth and would need remedial policy actions, such as proper and efficient registration of collateral and corresponding support by government to targeted credit sectors. With respect to consumer prices, non-price impediments such as within the fuel distribution sector ought to be managed to minimize its systemic impact on inflation. While, the realization of a draw down in forestry, should be an impetus to grow the other productive sectors.

It also presents a challenge where the fall in forestry revenue necessitates more fiscal discipline to ensure that government’s budgets remain affordable and sustainable.