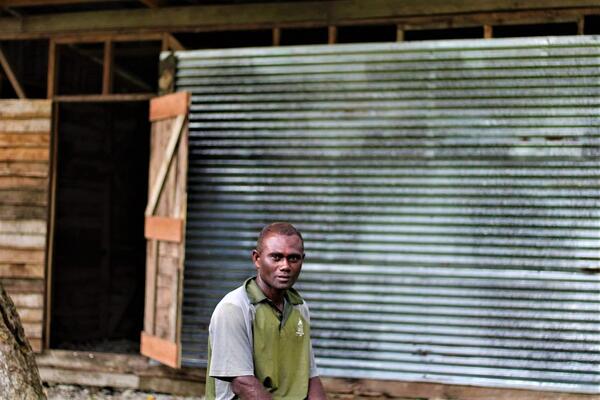 The roll out of the much-anticipated economic stimulus package has caused confusion, particularly for those in the rural areas.

The near nationwide consultation promoting the stimulus package has raised expectations, but many in the rural areas have not heard back from the committee responsible – no acknowledgement of application, or an update of progress.

“We were just told to prepare, and to apply, so that is what we did. I built this shed because I had a lot of hope that I would get it, even though they did not come and do awareness in our village,” Charles said, sitting in front of his half completed shed.

If there is anyone that deserves support, perhaps Charles ticks all the boxes. He started farming in his 20s, he settled with cocoa and for more than 15 years he attended to his cocoa farm and does most of the harvest himself. He has had no support from the government in establishing and running his farm.

“I was hopeful I might get support, just because they made it sound so easy. I heard of big amounts given to our MP, and also big amounts allocated for rural people.

"So, I spent the little savings I had just to show that I am serious and ready,” a frustrated Charles said.

“Now the money is gone with the wind. I now feel like it is all just a lie.”

The roll out of the economic stimulus support has been tainted with widespread allegations of “insider benefits.” It has been alleged that several senior staff members involved in the assessment and approval of the stimulus have benefited from the funds.

Worse still, several companies that benefited from the support have been deregistered, some not in the company registry, and some were recently registered.

The permanent secretary of the ministry of finance and treasury has assured the public that he will release the ‘proper recipient list’ after it was leaked to the public. To date, nothing!