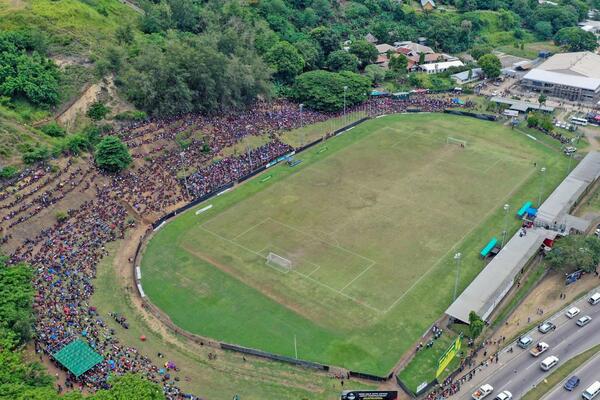 Thousands are expected to attend the finals at the Lawson Tama stadium.
Source: SIFF
Share
Thursday, 10 December 2020 08:28 AM

Malaita Eagles have the opportunity to defend their Solomon Cup title in a rematch against Western Tomoko in the grand final of the 2020 Solomon Cup on Saturday 12 December at Lawson Tama.

The defending champions secured a spot in the final after beating Isabel Frigates 5-2 in the first semi-final.

Malaita Eagles spread their wings in the 13th minute as Junior Zimri scored from close range.

Hudyn Irodao extended Malaita’s lead at the break to 3-1 and scored a fourth on the hour mark before a lone goal from substitute Joseph Nowae sealed a remarkable route to the final for the cup holders.

Isabel Frigates had some good moments in the second half despite the huge margin as Henry Titus scored a consolation goal in the 84th minute.

“Firstly I want to congratulate my boys for another important step towards our goal,” he said.

“We had a good preparation for this and we were much fitter than them because Isabel they look tied but they are a good team.

“Important thing is for us to recover ahead of the final.”

Oiaka thank the fans for their good behaviour and support for Malaita during the tournament.

In the second semi-final, it was a good start for Makira Ulawa Kakamora as George Hanua put them in front early in the 4th in front of nearly 16 thousand people at a jam pack Lawson Tama stadium.

Like in the final group match against Choiseul, Arnold Neboth turns the game on its head with a stunner in the 11th minute before Jaygray Sipakana scored a brace to give Tomoko a 3-1 lead at the break.

Sipakana completes his hat trick 53 minutes into the second half and round up his scoring spree in the 79th minute to take his tally to 7 goals as the competition’s leading goal scorer.

Neboth and second-half substitute Dickson Barisco put the final nail in the coffin to seal a spot in the final against defending champions Malaita Eagles.

“I want to give the glory and thanks to God because without him can’t do anything,” he said.

“Secondly I want to thank Makira for a very good game because they were good tactically despite the big score margin”.

Seri stressed that his lads are happy to take on Malaita in the final.

“Malaita is a strong side but we are excited ahead of the final and we are going to give them a good game.”