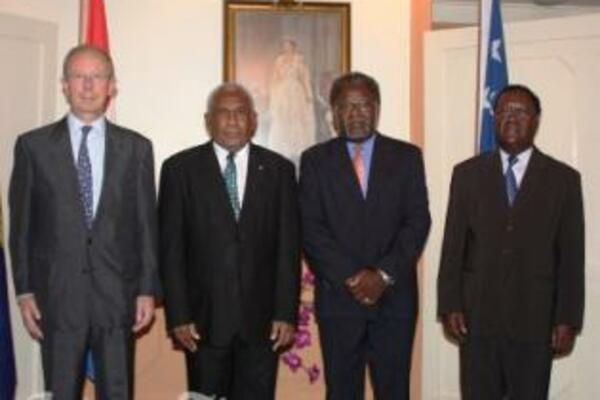 Netherlands newly appointed Ambassador to Solomon Islands has presented his Letter of Credence to the Governor General Sir Frank Kabui.

Prior to the formal presentation ceremony, Ambassador Cornelius Wilhelmus Andreae was given the opportunity to inspect an outside-forecourt ceremony staged by the police force.

Ambassador Andreae said strengthening diplomatic relations between Netherlands and Solomon Islands is necessary to facilitate trade between the two countries in spite of the vast distance that separated them.

He said Netherlands is the biggest European importer of commodities such as cocoa, coconut and palm oil around the world, including Solomon Islands.

He said investors in the Netherlands are keen to explore business opportunities in Solomon Islands, particularly, in commodities such as cocoa, copra and palm oil.

On challenges, the Dutch diplomat said Netherlands and Solomon Islands are facing the challenge of Climate Change, particularly, sea level rise which has already affected low-lying areas in the two countries.

Sir Frank said these are opportunities for trade and Solomon Islands could be a beneficiary if we worked hard to reach the required threshold.

On Climate Change, Sir Frank stressed that Carbon trading is clearly something to consider in the long term and we should make an effort to understand how it works for resource owners and the Government.

Ambassador Andreae is based in Canberra, Australia.