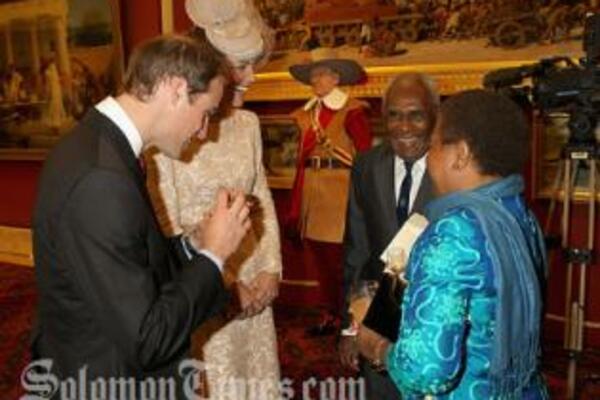 The Duke and Duchess of Cambridge meets with Sir Frank and Lady Kabui during the Jubilee Luncheon.
Source: hellomagazine.com
Share
Thursday, 07 June 2012 09:36 AM

The Duke of Cambridge has been practising his dance moves before a visit to the Solomon Islands, the Duchess said as the couple met dignitaries at Guildhall before the service at St Paul's Cathedral.

The couple will travel to the Pacific islands later this year and described their excitement to the governor-general, Sir Frank Kabui.

"We're extremely excited," said the Duke. "Both of us have never been anywhere near there."

"William's been practising his dance moves," added the Duchess.

The Diamond Jubilee Lunch that followed the service at St Paul's was hosted by the Livery Company, the ancient trade association of London, at Westminster Hall.

Representatives from charities, as well as members of the Armed Forces, were among those invited to dine with the Royal family. The menu included marinated Uist Island salmon with Lyme Bay crab, followed by saddle of Welsh Cambrian Mountain lamb with braised shoulder of lamb, grilled Isle of Wight asparagus, Jersey Royal potatoes and a Jubilee sauce.

After lunch, a Ceylon tea was served made from a bush planted by the Duke of Edinburgh during a state visit to Sri Lanka in 1954.