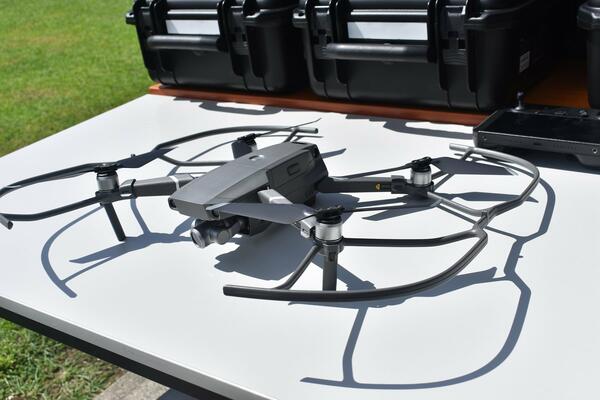 Commissioner Mangau explained that, “Like any other law enforcement agency, the RSIPF is focusing on its operational capability response by seriously considering the establishment of a Drone Support Unit.”
Source: Supplied
Share
Thursday, 05 November 2020 09:04 AM

Commissioner Mangau said, “I would like to thank the Australian Government through SIPDP for their continuing support to RSIPF. This is another milestone for RSIPF to boost its operational capability.”

“In the modern world, we are becoming dependent on technology. Drones are a new equipment in science and technology that play a major role in addressing so many problems in society. Drones will soon become part of our daily lives.”

Commissioner Mangau explained that, “Like any other law enforcement agency, the RSIPF is focusing on its operational capability response by seriously considering the establishment of a Drone Support Unit.”

“This Unit will be responsible for the overall coordination, and execution of a wide range of tasks and functions. It is anticipated that we might include full-time pilots, trainers, drone engineers, and data analysts, among others,” said Police Commissioner Mangau.

Australian High Commissioner Dr Strahan said, “As a steadfast friend through thick and thin, Australia is committed to enhancing the RSIPF’s capacity to protect the security of Solomon Islands, including by reinforcing border protection.”

“We are proud to fund this drone project. Drones are a capability multiplier, allowing Solomon Islands to conduct aerial surveillance on land and sea, enhancing its capacity to carry out criminal investigations, respond to natural disasters, manage traffic and undertake provincial surveys”, said Dr Strahan.

“The close collaboration between the RSIPF and the Australian Federal Police under the Solomon Islands Police Development Program is another concrete manifestation of the enduring commitment of Solomon Islands and Australia to maintaining peace and security in our shared region, the south west Pacific.”

The drone project cost approximately $250,000.00. In addition to the drones, this funding included a dedicated flight control unit, which RSIPF officers will receive training on to pilot the drones.

The RSIPF will use the drones for the following activities:

Two of the drones will be stationed at the western border with Papua New Guinea to support RSIPF operations.