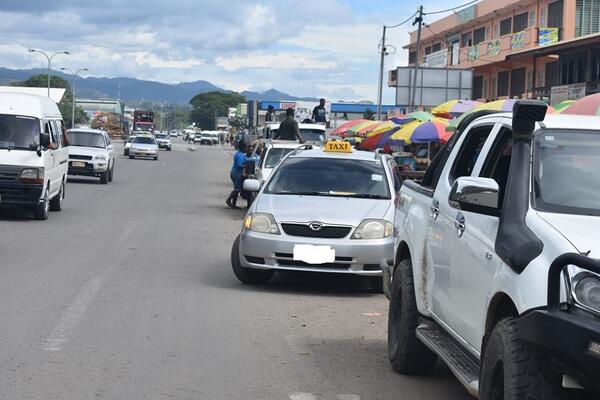 "It is embarrassing to see people including vehicle drivers ignoring police signs placed on the public road."
Source: RSIPF
Share
Thursday, 04 July 2019 09:17 AM

As officers of the Traffic Department continue to arrest and charge drivers for ignoring the Road Transport Act 2009, the Royal Solomon Islands Police Force is concerned that some drivers continue to park dangerously at the Fishing Village Market in East Honiara.

“It is embarrassing to see people including vehicle drivers ignoring police signs placed on the public road. These police sign boards and police cones are not placed there for mere decoration. They are to indicate to you drivers what you should and shouldn’t do when driving.

"Those sign boards and police cones are legal indicators or notices for the drivers to obey and follow. Failing to comply with those notices means you are breaking the Road Transport Act and you will be charged for disobeying those signs,” says Superintendent Fred Satu, Director of the Traffic Department.

Superintendent Satu adds: “I can confirm that three drivers were arrested and charged last Sunday (30 June 2019) for ignoring traffic cones placed on the road at the Fishing Village Market. The trio have been released on bail to appear in Court at a later date. Three other drivers were arrested at the Honiara Central Market for failing to comply with police directions under Section 53 (b) of the Road Transport Act.”

“Despite these actions by the police, drivers including individuals driving G-plated vehicles continue to park dangerously at the Fishing Village Market. We will continue to arrest the drivers and take them to court. Police cannot be at these locations all the time.

"Drivers need a change of mindset and follow instructions. We are dealing with adults and not children. If we adults continue to disregard our laws then how do we expect our children to follow our laws as they grow up,” says Traffic Director Superintendent Satu.

Drivers stopping at the Fishing Village Market are advised that the legal parking space is at the eastern end of the Market towards the Ministry of Fisheries as well as at the Kukum Seventh Day Adventist Church car park along the Vura Road.