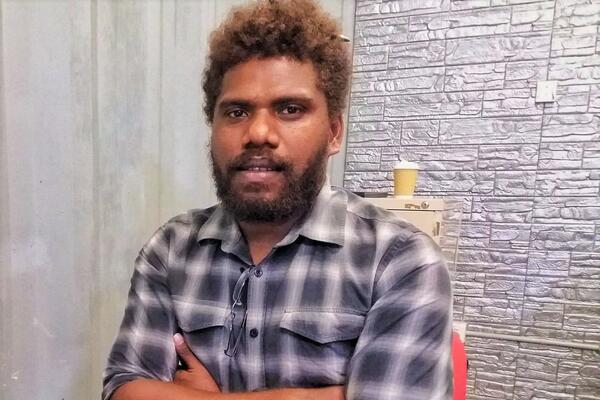 "My favourite announcers were Bart Basia, Jeffery Alexander and Modie Nanau. They were my icons back in the days and I always listen to their programs, staying up late sometimes,” Job recalled with a smile.
Source: STO
By Jeremy Gwao
Share
Thursday, 04 February 2021 11:15 AM

“It has always been my dream, to one day be a radio announcer – back in the days that was my only form of entertainment, just listening to the radio,” said Job Rongo’au.

Job Rongo'au comes from the highlands of central Kwara’ae in Malaita province, he says back than the only thing that connected him to the outside world was his little handheld radio.

He says growing up he spent a lot of time listening to the SIBC, imitating some of the radio announcers and singing along to his favorite songs.

“It was the only radio station that reached us in the highlands, so everyone had a small radio just to stay updated with news. I was always very interested in how the people spoke, their style, and I used to imitate them.

“When we were sent to the garden, I used to pretend to be a radio announcer imitating my favorite announcers, it was a long walk to the garden, so my bush studio was very popular with friends.

"My favourite announcers were Bart Basia, Jeffery Alexander and Modie Nanau. They were my icons back in the days and I always listen to their programs, staying up late sometimes,” Job recalled with a smile.

Job says while he did enjoy school, he did not make it past form 6. Despite such setback he did not give up, he kept going and applied for jobs – all the while imagining himself sitting in front of a microphone in a proper studio.

He said in 2014 he was accepted to study journalism at the Solomon Islands National University.

"I was a self sponsored student, so it was tough, took us a while but eventually I graduated with a certificate in journalism. I could not go any further because it was a struggle for my family to keep me in school.

He said in 2015, not long after graduation, he applied for jobs, targeting FM stations in town and was eventually recruited by Good News FM.

“My first day on air was funny, I was sweating and felt like my whole body was shaking, I was so nervous,” Job said laughing.

A year after Job said he applied and was recruited by ZFM, it was a dream come true for him – he was now a radio announcer for a mainstream FM station.

"I worked for over seven years and since it was my dream as a child, I really enjoyed it.

"I made my parents proud and I know I make them smile when I go on air, they struggled to put me in school, so it was worth it," Job said.

But there was more in store for Job, something he did not even dream about.

It came by unexpectantly, he had just completed his shift when his boss told him that he wanted to make him ZFM’s new station manager. He said it came as a shock to him, but he gladly accepted.

He says there are times he would recall the struggles him and his parent had gone through, and to be where he is now is just a dream come true.

"I just want to say to anyone who is struggling to fulfill their dream, continue to believe in yourself, and always remember that every dreams start little, but if you work hard it will be something bigger than what you dreamed about."