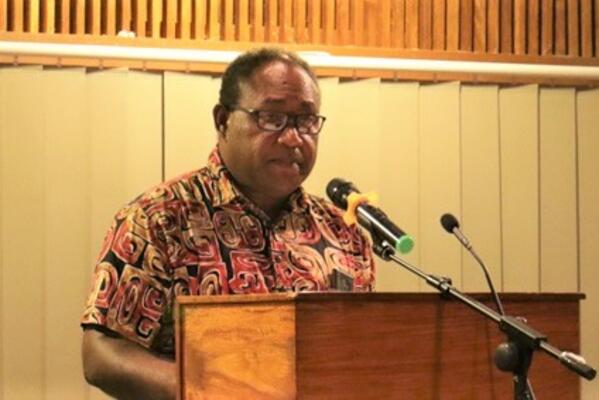 Hon. Maelanga further acknowledged the commitments and assistances rendered by the Government of Japan as a revelation of Japan’s spirit and bond of friendship towards its traditional partners like the Solomon Islands.
Source: Supplied
Share
Thursday, 25 February 2021 08:05 AM

This was during an occasion hosted by His Excellency, Morimoto Yasuhiro, Ambassador of Japan to Solomon Islands, to mark the birthday of the Emperor at Mendana Hotel on Tuesday this week.

During his remarks, Hon. Maelanga stated, “We can all agree that the Emperor’s dynasty is one of the hallmarks and cornerstones of Japanese society, therefore tonight’s occasion is historic and symbolic, and I would like to congratulate him as well and wish him good health, longevity and every success throughout his reign.”

According to the Deputy Prime Minister, “Japan is not just a traditional partner, but a very close friend of the Solomon Islands.”

“The relationship we share only deepens and strengthen each year and we value this friendship, it would be remiss of me not to acknowledge the successes and achievements that Solomon Islands enjoys from the work of great partnership, investment and collaboration of friends like Japan amongst others,” he said.

Hon. Maelanga further took the opportunity to express his sympathy towards the millions of innocent lives lost throughout COVID19 pandemic globally including the 6000 in Japan.

“We can only continue to pray for them and their families,” he said.

Hon. Maelanga further acknowledges the need for cooperation amongst countries.

“I want to thank the Government and the good people of Japan for the continuous assistance to the Government of Solomon Islands during this pandemic era,” he said.

The Deputy Prime Minister also stated, “I’m heartened to reiterate that the commitments devoted by the Government of Japan and its implementing agencies over the years had truly depicted Japan’s goodwill and friendship to the Government and People of Solomon Islands.”

Hon. Maelanga further acknowledged the support made by the Government of Japan.

“The commitment is evident in some of the major infrastructural developments within the Solomon Islands to date. For instance, the Auki market and Jetty project, the construction of the Gizo hospital, the Kukum Highway projects and the construction and refurnishing of the Henderson International Airport, just to name a few,” he said.

Hon. Maelanga further acknowledged the commitments and assistances rendered by the Government of Japan as a revelation of Japan’s spirit and bond of friendship towards its traditional partners like the Solomon Islands.

“And for this I would like to once again sincerely express gratitude and appreciation to the Government and the people of Japan,” he said.

Japan and the Solomon Islands have been enjoying friendly and cooperative relations since the Governments of both countries established diplomatic relationship on 7 July 1978.