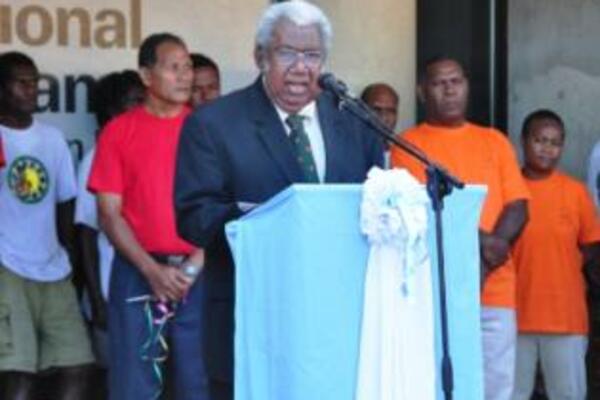 More than 10,000 people filled National Parliament yesterday to learn more about their vote, their voice and how their democratic system of government works.

At the official opening of Parliament Open Day 2009, the Speaker of Parliament and Chairman of the Electoral Commission, the Right Hon Sir Peter Kenilorea, thanked everyone for showing such a strong interest in visiting parliament.

"Parliament is the voice of the people, and people participate in shaping their parliament through casting their votes during national general elections. This is why this year's Open Day theme is, "Vote blo iu, Parliament blo iu", and was jointly organised and hosted by National Parliament and the Electoral Commission," said Sir Peter.

Open Day 2009 was even bigger than last year with more people visiting, especially school students, who came to find out about the various organisations that Parliament works with.

Sir Peter said he hoped that Parliament Open Day becomes a day of national importance each year for people to come and find out more about their government and become active citizens in Solomon Islands' democracy.

At the Electoral Commission's stall people found out about voter registration which will happen soon before next year's general election and also practiced how to vote at a mock polling station.

"The focus of our awareness raising is to make people aware of how the voter registration process works, which begins soon, and give people the chance to practice voting. People learnt how to mark their ballot paper correctly - by ticking the box on the ballot paper next to the candidate name and symbol."

Sir Peter thanked the staff of all the organisations who displayed information and answered people's questions.

Of the 2,000 people who completed the Democracy Quiz, Joy Ghasy, was the lucky winner of two return tickets to Brisbane sponsored by Solomon Airlines. The organizers also thanked ANZ Bank, Sullivans, One News and Coca Cola - PNG for contributing prizes for the event.