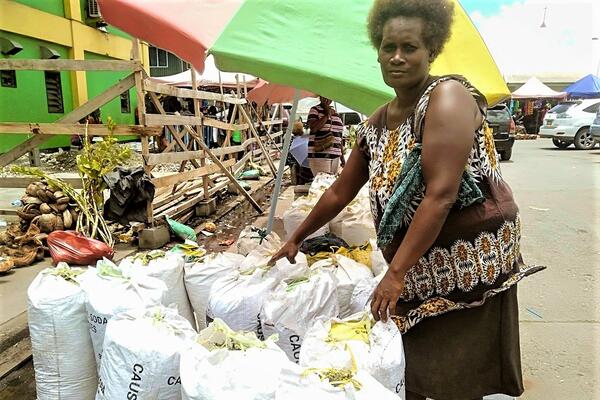 Jennifer says that she started selling topsoil at the central market 10 years ago and is now one of the main suppliers for residents in Honiara.
Source: STO
By Jimmy Nolan
Share
Tuesday, 13 October 2020 09:02 AM

With the confirmed case of COVID-19 in the country the demand for compost has increased as residents in Honiara turn to backyard gardening.

It is an attempt to secure their own food security if a lockdown is imposed.

A vendor at the central market says that there is a noticeable increase in the demand for topsoil, and it has become good business for her.

"The demand for topsoil has gone up, over the years I have tried different types of topsoil mix and this has helped me because I can meet demand,” says Ms Jenifer Patrick, one of a handful of vendors that sell topsoil at the central market.

Jennifer says that she started selling topsoil at the central market 10 years ago and is now one of the main suppliers for residents in Honiara.

Jennifer comes from Malaita province, but moved to Honiara with her family in early 2009. She says her decision to move to Honiara was influenced by the growing demand for topsoil at the central market.

“During a visit to relatives in Honiara I found that there was high demand for good quality topsoil, so I decided to move to Honiara. I stayed with relatives at Burns Creek and I worked with women in the area to bag and sell topsoil,” Jennifer recalls.

Jennifer was also driven by the fact that she had 7 children, she wanted them to do their high school in Honiara – so a steady income was particularly important to her.

"In the early years there were times I went back home with nothing, I wanted to give up, but I knew that if I stopped my family would suffer.”

Jennifer says she kept experimented with various types of soil mix and kept pushing even when times were hard.

She says today business is good, but she has high overheads, and people always try to bargain, which sometimes affects her daily takings.

"I sell topsoil for $40, sometimes $35, depends on the movement of people – a lot of them always try to bargain. Also, for me, my biggest cost is transport and market fees, which does affect what I make at the end of the day.”

She says that there should be some assistance for people like her, because most in Honiara use raised vegetable beds which needs good compost.

She suggested that relevant government agencies buy bulk from topsoil suppliers like her, stock it at a convenient location throughout Honiara where people can collect. She says good healthy topsoil is especially important for those that use raised vegetable beds - which is now very common in Honiara.