Decisive Day Looms for Group A in Suva 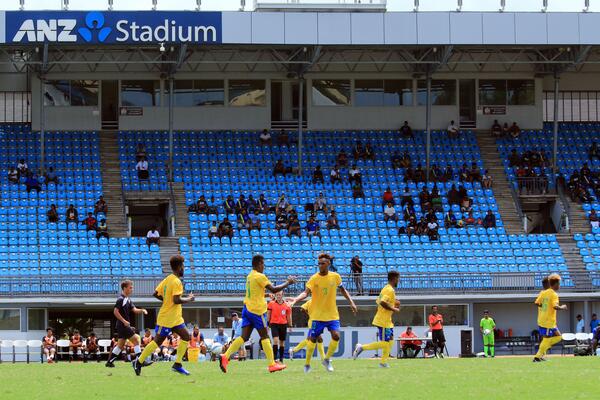 Early pacesetters Solomon Islands and New Zealand will be both looking for back-to-back victories in order to secure their passage to the semi-finals of the OFC Men’s Olympic Qualifier tournament with a match day to spare, while Samoa and American Samoa must produce upsets to keep their qualifying dreams alive Tuesday in Group A action.

On the back of a comprehensive 6-0 win over American Samoa, the U-23 Solomon Islanders will go into their second match against Samoa knowing that another win would all but guarantee a top-two finish in the group and a place in the knock-out stage of the competition.

Meanwhile New Zealand, equally impressive and clinical in their opening match, will carry a hot favourite tag in their later kick-off against an American Samoa side which similarly to Samoa face the risk of an early exit from the competition.

Spoilt for attacking options with the likes of Darold Kakasi, Augustine Waita, Patrick Taroga and Adrian Mara, most pundits believe the Solomon Islanders will prove a bridge too far for Samoa in Tuesday’s opening encounter.

However, Des Edward’s outfit, which showed plenty of encouraging signs despite a 6-1 defeat to New Zealand in their opener, will be determined to get something out of the game and stay alive in the competition.

“Every game is a final for us, against Solomon Islands it will not be an easy game, another tough challenge but we are here to compete at this level,” said the defiant Samoa coach.

“We saw them play against American Samoa and we need to prepare well against them if want to compete,” added Edward.

“We will prepare the same way we have prepared against American Samoa and I told the boys not to underestimate any of the teams, but we hope to get another good result another win," he said.

“I know Samoa are capable of causing an upset and we need to be cautious,” insisted Suri.

Regional giants New Zealand have also signalled their intentions by kicking off their Olympic Qualifier campaign with a dominant display, but coach Des Buckingham is refusing to get carried away ahead of his team's next assignment.

“We approach the next game the same we approach all of our games, we take nothing for granted,” he said.

We watched them against the Solomon Islands and it was a good game, so we will approach it the same way, with a focus on us.”

The New Zealand coach has also hinted of wholesale changes to test the depth of his squad going into the second match of their campaign.

“We have a lot of fresh players really waiting to come and play for their country and they will get their opportunity to do that to make sure that everybody gets some game time leading up to that final group game," said Buckingham.

His American Samoa counterpart Stephen Settle admits New Zealand will likely to pose a daunting challenge for his side, however he insists his players are looking forward to measure themselves against one of the top sides in Oceania.

“New Zealand are quality and these are the types of challenges and adversities that we want to face, iron sharpens iron and the only way we are going to get better is to continue to play better teams and to get that sense of urgency in our play and continue to work,” the American Samoa coach explained.