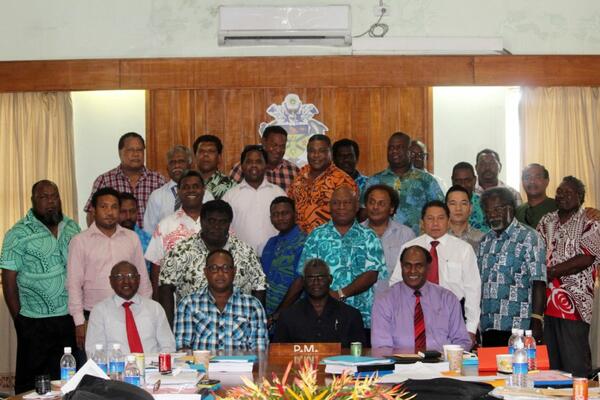 Prime Minister Sogavare and members of the Caucus at their meeting today which saw the expression of continued strong support by Caucus for Sogavare’s leadership.

UDP is one of the three Coalition Partners in the ruling Democratic Coalition for Change (DCC) Government headed by Hon Sogavare. The other partners are the Peoples’ Alliance Party and Kadere Party.

The announcement was made during a Caucus meeting today where the UDP MPs disassociated themselves from the decision taken by Sir Tommy to remove Prime Minister Sogavare from UDP. The decision would have automatically nullified Prime Minister Sogavare from being the UDP Parliamentary Wing-Leader if it was endorsed by the UDP Executive. The UDP MPs told Caucus that Sir Tommy took the decision unilaterally because it was never discussed and endorsed by the UDP Executive.

As such, the Caucus said, “We are pleased to assert that we, the Parliamentary Members of all Coalition Partners of the present DCC Government, continue to maintain the unwavering support that we have for the East Choiseul MP as the Prime Minister of Solomon Islands since the formation of the DCC Government in December 2014.

“We will continue to render this strong level of support for the leadership of Prime Minister Sogavare till the end of the DCC Government’s four-year tenure in office.”

It said it is of the strong conviction that any compounded differences which transpired to the unilateral decision taken by Sir Tommy, are matters to be dealt with at the UDP level and thus will allow it to deal with its issues internally.

The Caucus said the DCC Government is determined to achieve its policy objectives for the betterment of Solomon Islands during its tenure and therefore will not give in to any challenge or opposition.