Date for Final Referendum in New Caledonia Not Free Or Fair: MSG 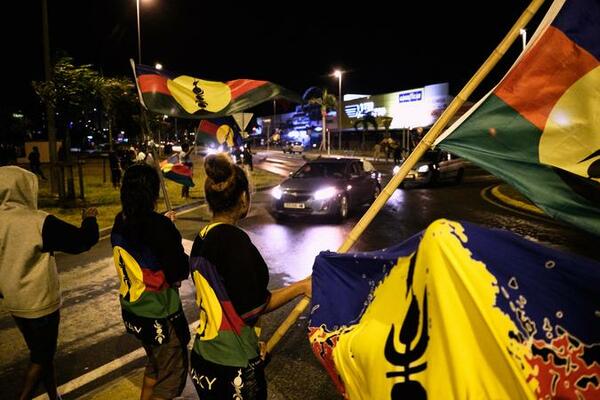 The MSG Secretariat had been convening a number of bilateral meetings with FLNKS on the political situation in New Caledonia and is concerned about the way in which the 3rd referendum is being progressed.
Source: RNZ
Share
Thursday, 09 December 2021 07:10 AM

The Melanesian Spearhead Group (MSG) Secretariat has informed MSG Leaders on the current political situation in New Caledonia with regards to the third and final Independence Referendum, scheduled for 12 December 2021.

In a letter to the MSG Leaders, the Acting Director General, Mr George Hoa’au, said that the 3rd referendum is a unilateral decision by France to hold the referendum on the 12th December 2021.

He said that despite of the MSG and the Kanak and Socialist National Liberation Front (FLNKS) petition through the Chair of the MSG Permanent Representatives to the United Nations, who presented a statement to the Fourth Committee highlighting the significant political situation in New Caledonia as well as the challenges relating to the organization of the referendum due to the COVID-19 pandemic in October 2021, it unfortunately did not deter France’s stand, who still insisted that the 3rd Referendum goes ahead on 12 December 2021.

Mr Hoa’au said that the situation in New Caledonia is not at all conducive for a free and fair referendum given the ongoing challenges and lockdowns throughout the year as a result of COVID-19 measures.

“The situation has made it impossible for FLNKS to undertake extensive campaigning given the current ‘State of Emergency’ and restrictions of movement of people currently enforced in New Caledonia as a result of the outbreak of the Delta Variant of COVID-19 in the territory,” he said.

He said that these facts alone pose great difficulties for FLNKS to organize community meetings, rallies and popular gatherings, making it impossible to engage in political campaigning. Sadly, this is common knowledge to France.

The ADG continued to state that there is no way for the indigenous people to participate freely and meaningfully, without fear and intimidation in the 3rd referendum and it is only appropriate for the administering power, France, to heed the call of the pro-independence parties to defer the referendum to a later date, preferably in 2022.

Information released to the Secretariat by the FLNKS showed that to date, there are about 274 COVID-19 related deaths mostly indigenous Kanak people; and the Melanesian communities are still undergoing customary mourning ceremonies. In this regard, the international community must understand that customary and traditional ceremonies relating to the passing away of loved ones are the most sacred in Melanesian societies and religiously must be respected.

It is understood that the FNLKS has called for non-participation in the referendum given the very reasons that had been stated above. The MSG Secretariat had been convening a number of bilateral meetings with FLNKS on the political situation in New Caledonia and is concerned about the way in which the 3rd referendum is being progressed.

The current state of affairs in New Caledonia is not favourable to the future political aspirations of the FLNKS and Kanak people as it will pose negative implications on the outcome of the referendum. Hence the MSG Secretariat is calling on MSG Members to lobby the support of the international community to support the call by FLNKS for the deferment of the 3rd referendum to a later date, when the conditions in New Caledonia improves, preferably in 2022.

Official letters were dispatched yesterday to the Offices of the Prime Ministers of Fiji, Papua New Guinea, Solomon Islands and Vanuatu, through their respective Foreign Affairs Ministries, from the office of the Acting Director General (ADG) of the MSG Secretariat. Comparing the results of the previous two referendums that were held in 2018 and 2020 respectively, the percentage of votes in favour of independence had drastically increased by 20 per cent while the percentage of votes against had decreased by 3.5 per cent.

The MSG Leaders were informed that the majority of the population that voted against independence come from the “Southern Province” where the capital Noumea is located. It is also the most populated province which consists predominantly of other ethnic backgrounds and residents making up about 27.1 per cent of the total population in New Caledonia.

“Therefore, for the 3rd referendum, the FLNKS will need to undertake extensive campaigning efforts in the southern province and continue to maintain the trend of voting in favour of independence in order to achieve their aspiration for independence,” he stated.

Mr Hoa’au said that the leaders’ vision for MSG solidarity in spearheading the FLNKS cause for political independence for New Caledonia from France, is now very crucial hence the Secretariat is seeking Member’s usual unwavering commitment in providing necessary support to the FLNKS, through international advocacy.

“There is an urgent need for MSG Leaders to engage France through the various diplomatic channels available on the wish of FLNKS to defer the 3rd referendum and call for greater transparency and fairness in the conduct of the referendum particularly given the difficulties posed by COVID-19,” the ADG stated.

This is a crucial time for Melanesian People in New Caledonia to decide their own future but unfortunately MSG sees France uniliteral decision against the Noumea Accord as not facilitative and unfair. The referendum date should be agreed by both parties in the spirit of consultation and dialogue under the Noumea Accord.

The MSG Secretariat is urging its Leaders and those who commit themselves to support the total eradication of colonialism around the world, consistent with United Nations resolution, not to recognise the outcome of the 3rd Referendum on the 12 December 2021 if France pursues without the participation of the indigenous people.