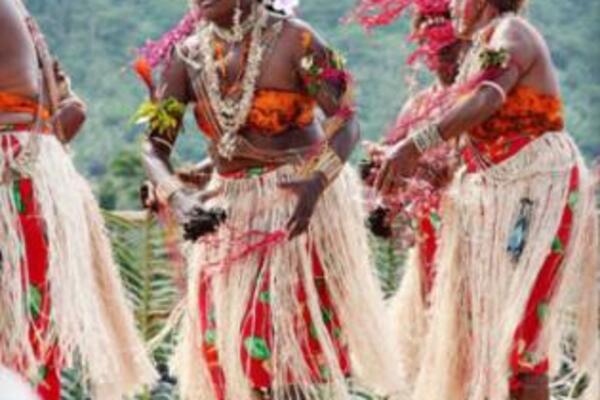 Thousands braved the sweltering heat for the very colourful and culturally charged opening of the 11th Festival of Pacific Arts in Honiara, Solomon Islands yesterday.

To open this major regional event, dubbed the 'Olympics of Pacific arts and culture' by local media, delegations from 19 countries as well as the Solomon Islands' nine provinces marched from the town centre to Lawson Tama Stadium in full national regalia, where they presented traditional song and dance as well as gifts to the Solomon Islands Governor General Sir Frank Kabui.

Earlier the same day, Solomon Islands, which is hosting the festival for the first time, presented traditional gifts to visiting countries at an early morning ceremony on the beach that began with spectacular fireworks, followed by vaka (double-hulled canoes) from several countries and tomoko (war canoes) from Solomon Islands' Western Province pulling ashore and ending with rousing performances by delegations.

The next two weeks will see Honiara transformed into a 'mini Pacific', to quote Solomon Islands Prime Minister Gordon Darcy Lilo, who officially opened the festival.

Reflecting on the festival's theme, Culture in harmony with nature, Mr Lilo said: 'I am confident that enhancing understanding of cultures amongst the people of the pacific will help in social development, peace and prosperity and at the same time, conserve the natural environment for our survival.'

He added: 'Twenty years after the UN Earth Summit in Rio in 1992, scientists have sufficient evidence to inform us that the earth has reached its planetary limits or abilities to contain global warming and climate changes. Against this, it is essential for us to explore with haste and progress appropriate actions and identify key strategic areas to save and protect our ocean and land for our generation and future generations. Some of the solutions for these challenges are in the knowledge of our cultures.'

Dr Jimmie Rodgers, Director-General of the Secretariat of the Pacific Community (SPC) and a Solomon Islander himself, echoed those sentiments in his opening address, saying: 'The Festival provides an opportunity to reflect on the critical importance of culture in the sustainable development of our nations.

'Indeed, culture is just as important as economic and social development and the sustainable management of natural resources. It is the glue that underpins the fundamental values of heritage, knowledge, creativity, diversity and identity that define our character as people and citizens of our respective nations.'

He added, 'Investment in sustainable economic development must accord equal attention to appropriate investments in our cultural vitality to maintain and enhance quality of life for Pacific peoples.'

Alongside the cultural components such as dance, music, art, craft and fashion taking place at the festival, a number of important high-level meetings are being held to examine some of the questions facing the region's cultural sector.

Founded by SPC, the Festival of Pacific Arts this year marks its 40th anniversary of (the first festival was held in Suva in 1972). SPC currently hosts the Council of Pacific Arts and Culture (the festival's governing body), which facilitates the organisation of the festival.

In Honiara, SPC's technical teams in areas such as health, biosecurity, water and sanitation, agriculture and media, together with its cultural and human development staff, is supporting the festival organising committee in its efforts to ensure the success of the festival.

SPC's Regional Media Centre is coordinating live daily broadcasts of the festival's events to the region, which can also be viewed online at: www.festival-pacific-arts.org.sb/index.php/live-stream.html.

The organisation's interpretation and translation team is supporting the bilingual meetings of the Council of Pacific Arts and Culture and the second meeting of the Ministers of Culture for the region.