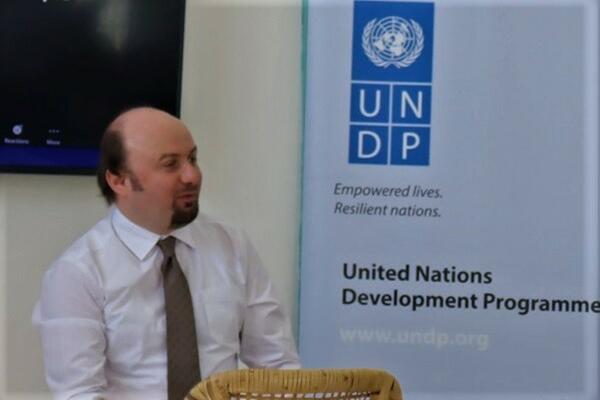 UNDP Project Manager Mr. Vardon Hoca emphasized UNDP’s commitment to the partnership with Solomon Islands Government (SIG) and other partners, build effective, accountable and inclusive institutions at all levels, thus contributing in the efforts of Solomon Islands authorities in their fight against corruption.
Source: Supplied
Share
Wednesday, 17 February 2021 06:10 AM

The United Nations Convention against Corruption (UNCAC) recognizes the role of civil society in combating corruption by calling on governments to increase transparency, improve public access to information and to promote public contributions to the government decision-making process.

Development Services Exchange (DSE), the umbrella organisation of Civil Society Organisations (CSOs) in Solomon Islands, in partnership with UNDP successfully concluded the reflection workshop for five grantee organizations, beneficiaries of the Transparency and Accountability Project (TAP), which aimed to discuss the achievements of the CSO’s in combatting corruption, challenges ahead and plans for the future.

At his opening remarks, UNDP Project Manager Mr. Vardon Hoca emphasized UNDP’s commitment to the partnership with Solomon Islands Government (SIG) and other partners, build effective, accountable and inclusive institutions at all levels, thus contributing in the efforts of Solomon Islands authorities in their fight against corruption.

“Combating corruption is a mission which can be fulfilled only if there is a joint effort of all parties involved. To this, civil society organizations have a pivotal role in fighting corruption and influencing both the public and authorities, as well as assisting the state authorities in addressing threats stemming from corruption”,” said Mr. Hoca.

“You played an important role in terms of advocacy, awareness and information-sharing during your recent campaigns. Positive feedback from communities you reached clearly indicated people’s willingness to learn and support in the fight against corruption,” said Mrs. Wate.

UNDP, via TAP has set up a grant scheme to support CSO activities in terms of awareness-raising, evidence gathering, and monitoring and evaluation activities and more generally, contributing to the overall goal of reducing the impact of corruption on access to services and information.

The TAP project is drawing on the achievements and expertise within UNDP and the United Nations Pacific Regional Anti-Corruption (UN-PRAC) project, supported by UNDP and the Governments of Solomon Islands Government, the United Kingdom and Japan.