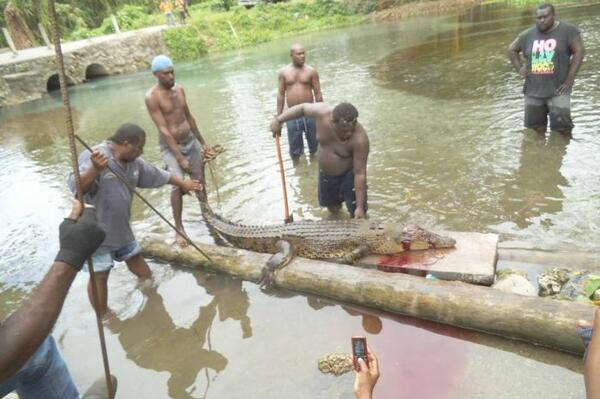 At least five people are known to have been killed by saltwater crocodiles this year alone in Solomon Islands.
Source: abc.net.au
Share
Friday, 21 September 2018 07:33 AM

Locals and experts say crocodiles are becoming a dangerous menace in Solomon Islands and are worried about a growing number of fatal attacks, but authorities are currently limited in their ability to cull the reptiles.

At least five people are known to have been killed by saltwater crocodiles this year alone. The latest was a 14-year-old boy, who was attacked while diving for fish with his friends in August, while a six-year-old was killed in late May as he swam in a creek.

"It's the largest species of crocodile in the world … they are responsible for a number of attacks throughout their range and Solomon Islands is no different," Matthew Brien, acting manager for northern wildlife operations at the Queensland Department of Environment and Science, told Pacific Beat.

A specialised police crocodile control unit was set up last year to hunt down reptiles causing trouble for local communities.

Its officers are the only ones allowed to shoot the crocodiles, but they are based in the capital Honiara and respond to incidents across the country once communities request help.

It is widely believed the country's crocodile population began to grow when a ban on harvesting and exporting their skins came into effect 30 years ago.

The ban was put in place after crocodile numbers dropped due to overharvesting and the Convention on the International Trade in Endangered Species of Wild Fauna and Flora (CITES) placed the crocodile on its endangered list for Solomon Islands.

Since then there have been no accurate figures on the number of crocodiles in the Solomons, which is why the Government has now ordered a national crocodile survey to be carried out, as it looks to make a decision on possibly lifting that ban.

Dr Brien, who studied crocodile behaviour as part of his PhD, has been in Solomon Islands to provide advice on the survey.

"It's very challenging to do standard boat surveys in places like the Solomons that have so many remote islands, so their approach to this issue is very innovative, and I believe they've got some very good data that should help inform upcoming management programs and anything else the Government decides to do," Dr Brien said.

Members of the public have been calling for the ban on crocodile harvesting and trade to be lifted, suggesting such a measure would help control the population.

The prospect of generating economic activity from crocodiles is an attractive one, as it would provide much-needed jobs and income for the Pacific nation of 600,000 people — and a return to the skin trade is one possibility the Government is considering.

But Australian John Lever, who pioneered crocodile farming in neighbouring Papua New Guinea in the 1970s, said crocodile tourism would be a better option for Solomon Islands.

"In the Solomons where you have a limited population of crocodiles, the best future for them is not the skin industry but rather for the tourism industry, same as in PNG and Australia [where] crocodiles are used as a public education facility," he said.

"Everybody would like to see big crocodiles, so being able to go out and catch crocodiles and put them in a facility where people can see these large crocodiles and see the feeding [would be worthwhile].

Once completed next month, the Solomon Islands' Government intends to use the survey results to develop a crocodile management plan.

It will also petition for saltwater crocodiles to be removed from the endangered species list.