Crocodile that Ended the Life of Young Footballer Caught and Killed 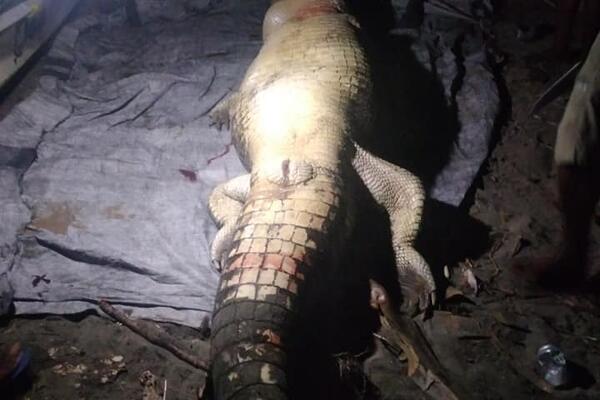 This tragic death of a young footballer is a cruel reminder of the dangers that lurks in our waters and oceans.
Source: FB: Allan Muanimae Jr.
By Jeremy Gwao
Share
Monday, 02 November 2020 10:01 AM

The crocodile that tragically cut short the life of young 13-year-old footballer, Kisina Kuliusu Damutalau, was caught and killed by villagers in Havulei in Isabel Province over the weekend.

The late Kisina Kuliusu Damutalau was attacked and killed by the saltwater crocodile last week Monday.

Kisina was part of the Isabel Frigates U-14 team that recently participated in the National U14 held in Honiara.

This tragic death of a young footballer is a cruel reminder of the dangers that lurks in our waters and oceans.

Commercial crocodile hunting was banned in the Solomon Islands in 1993, since than the saltwater crocodile population has recovered rapidly. Breeding has been recorded on every major island.

With more and larger saltwater crocodiles present, the number of attacks on people has increased and will most likely continue to do so.

A 2019 report by World Fish titled Human-crocodile conflict in Solomon Islands suggested that the government take the following steps to reduce crocodile attacks.

The reports says that such steps can minimize the risks saltwater crocodiles pose to coastal communities and ensure that people and crocodiles continue to coexist in Solomon Islands.