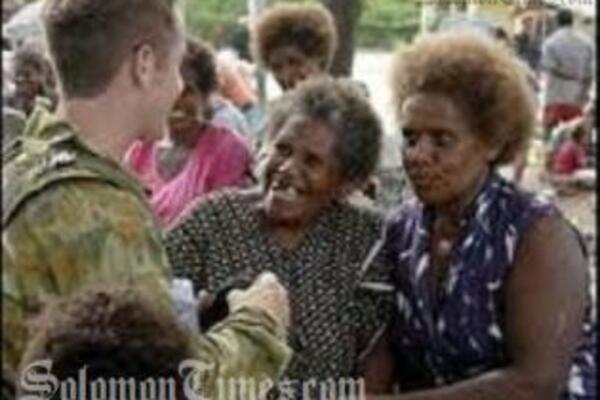 According to a secret United States diplomatic assessments, more than a billion dollars and eight years of effort by Australia has failed to build political and economic stability in the Solomon Islands.

The assessments say Australia's intensive policing and aid effort has not succeeded in stabilising the country and predict it would relapse into turmoil within weeks if the multinational Regional Assistance Mission were withdrawn.

"Despite large-scale Australian assistance and intensive institution building, Solomon Island democratic institutions clearly cannot cope with the deep fissures and frustrations that divide the many communities in its society," the US embassy in Port Moresby has reported to Washington.

The bleak assessment of Australia's efforts to build effective governance through the Regional Assistance Mission to the Solomon Islands (RAMSI) is given in confidential US diplomatic cables leaked to WikiLeaks and provided exclusively to the Herald.

Describing the Solomon Islands as "fragile" if not "broken", US diplomats have suggested that external assistance may be required for another 10 or 15 years, though it is thought "highly doubtful that the [Solomon Islands government] or the majority of Solomon Islanders envision RAMSI's presence for that long."

They claim that "if RAMSI officers should leave tomorrow, the Solomons could quickly revert to the sad state before its arrival."

Comprising Australian, New Zealand and Pacific island military and police contingents together with civilian administrators, RAMSI was first deployed in the Solomon Islands in July 2003 as the request of its government after a widespread breakdown of law and order.

The peacekeeping and institution-building effort has cost Australian taxpayers more than $1 billion. In 2011-12 Australia will provide the Solomon Islands, which has a population of only 500,000, with more than $260 million in overseas development assistance. Australia has more than 100 troops and 15 federal police officers deployed there.

However, despite the massive aid effort, US officials have approvingly quoted the assessment of diplomatic contacts in Honiara that if RAMSI left it would take about a week for trouble to break out since none of the underlying issues which caused widespread ethnic violence have been addressed.

"There are still people out in communities who have not been brought to justice for atrocities committed during the ethnic conflict. These incidents and the economic tensions ... continue to fester. As is clear to every observer, over the 28 years since independence, modern government has failed to take firm root."

Visiting US diplomats found that RAMSI remains popular with the Solomon Islands people but they also report that the conduct of Australian officials has generated significant resentment.

"There is sentiment that some RAMSI officials/contractors have been heavy-handed, not sensitive to cultural issues and at times patronising in their treatment of Solomon Islanders,"the US embassy in Port Moresby has reported.

US diplomats quoted one Australian RAMSI official saying "I've worked in the Northern Territory ... and I know how to deal with these people."

The leaked US reports confirm that RAMSI and the Australian government were taken completely by surprise by the ethnic riots that devastated Honiara in April 2006. They also record the breakdown of relations between Canberra and the former government of prime minister Manasseh Sogavare who in 2006 declared the Australian high commissioner Patrick Cole persona non grata for alleged interference in Solomon Islands domestic politics.

According to US diplomatic reports, the Australian government responded by secretly blacklisting all Solomon Islands MPs from entering Australia and then prime minister John Howard telephoned his Solomon Islands counterpart to threaten: "I will make things very difficult for you and your government."

The US diplomatic reports frequently refer to endemic corruption in Solomon Islands politics and highlight the role of Taiwanese money in exacerbating political tensions. Australia and the US have protested to Taipei to reduce efforts to buy political influence. The Solomon Islands is one of a handful of countries that maintain diplomatic rel-ations with Taiwan and not China.